The Netherlands beat Portugal 3-0 in their second FIVB World League match of the weekend on Sunday. Niels Klapwijk and Alexandre Ferreira were the top scorers. WorldofVolley brings you the latest volleyball news. 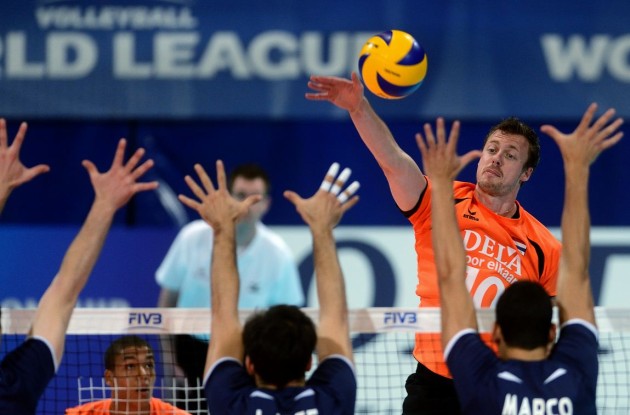 The Dutch, who had been beaten 3-2 by Portugal in the same venue on Saturday, began with intent, creating an early three point gap. Powerful serving from Nimir Abdel-aziz and spiking by Jelte Maan put them further ahead, causing Portuguese coach Flavio Gulinelli to call for his first timeout. It helped, as Portugal battled back to 17-16, and the Portuguese eventually got the first set point. But the two teams traded points furiously, neither able to get two ahead. Jeroen Rauwerdink made an incredible save, and in front of an excited crowd, two great Niels Klapwijk serves finally won the Dutch the set, 36-34.

The third set was more straightforward for the Netherlands, who got 8-4 ahead, with Abdel-aziz and Thomas Koeleman standing out. Portugal made too many errors, and Rauwerdink’s flying spikes stretched the lead. Portugal fought hard, but Nico Freriks helped the Dutch get to match point and shut out the win, 25-22.

Niels Klapwijk was top scorer in the match with 14 points. Alexandre Ferreira scored 12 points for Portugal.

Netherlands are now top of pool C with 13 points. Portugal are in fourth place with seven points.

2,700 spectators watched the match at the Omnisports Arena.