Japan won in three sets against Tunisia in the beginning of qualification round robin for places 17 to 20 at FIVB Boys' U19 World Championship. 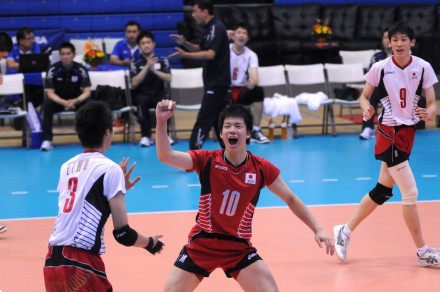 Yuki Ishikawa was the best scorer for the Asian team with a total of 21 points, including one ace and four blocks. Captain Tsubasa Hisahara closed with 12, and Yuki Suzuki registered 11.

However the first two sets were very tight. Tunisia tried to surprise with Ayman Soltani and Wassim Ben Tara, who scored 11 and 10 points respectively for the Tunisian squad, that will still look for their first victory.

Slimane Lotfi Ben, coach of Tunisia: “Congratulations to Japan for the victory. They play a very intelligent volleyball and are very strong and we expect to improve in our next match”.

Hiroshi Honda, coach of Japan: “It was tough to win today against Tunisia. It is a team that made good changes, with high potential. Good

Wael Mirka, captain of Tunisia: “Congratulations to Japan, they played a very good match. We also played good in the first two sets, but had some fails on the reception and lost concentration in the third”.

Tsubasa Hisahara, captain of Japan: “We are happy to win this match, we made good things on the third one and improved our defense.”