Russia stopped the early Tunisia challenge to win in straight sets 25-23, 25-15, 25-21 in the second round (Round of 16) of the FIVB Men's U21 World Championship at Ataturk Hall in Izmir, Turkey on Wednesday. With this victory Russia qualified to the quarterfinal for the top 8 positions, while Tunisia plays for the 9 to 16 positions. 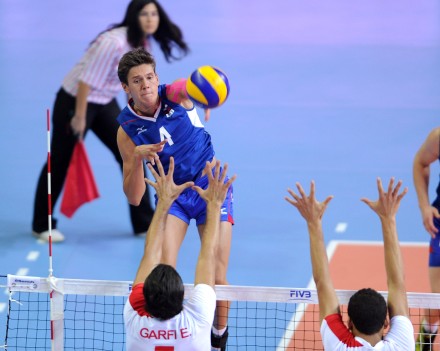 As usual the Russian opposite Victor Poletaev was the team scorer with 16 points including 3 ace services and 2 dying blocks, followed by team captain Egor Feoktistov 12 points.

Tunisia started the match with high motivations and thus they led constantly 8-5 and 16-12 at the TTOs due to their service and attacking strategy specially through the opposite spiker Oueslati. When Tunisia was ahead 22-18, the Russian team started to put pressure through the blockers and also the spike service to score 7 points against only one for the Tunisians in their way to win the set 25-23.

Tunisian performance dropped acutely, while the Russian team improved in all skills making over a second set win widely 25-15. Although the Russian team increased their attacking activity in the third set, but the Tunisian team reacted positively improving their blocks and defence to maintain near, till Russia won the set 25-21 and the match in straight sets.