Very convincing win for Croatian team at the start of championship. Mostly thanks to excellent Sanja Popovic, Croatia destroyed Azerbaijan in straight sets with only second one being close call. 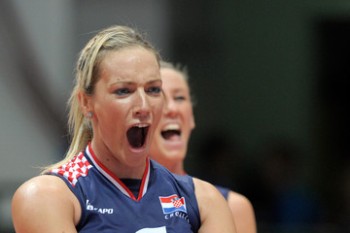 First set was as one sided as they get. Croatia got the first lead and never let go. Not one single time has Azerbaijan got even and at the end the score was 25-15.

Rahimova let her teammates in the second period like a proper leader but that was not enough. Even though Azerbaijan held score at level right until the very end of the second set, they didn’t had a strength and determination to equalize. Croatia took their second set point and made the score 2-0 (25-23).

After such an effort that Azerbaijan team had their ran out of gas and on the other side of the field, Croatia was fired up and eager to take advantage of momentum. Game soon came to an end and Croatian girls, got their straight sets win 3-0 (25-21).