Before start of the EuroVolley, almost all coaches have agreed that Serbia is the main favorite for gold medal. But, Bulgaria made first surprise and beat defending champions in tie-break match 3:2 (23:25, 13:25, 25:22, 30:28, ) in the first match of Pool D in Schwerin, Germany. 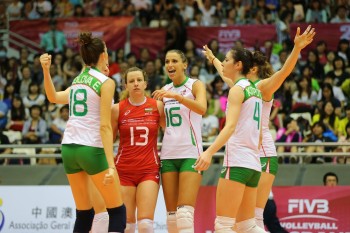 After first and second TTO, Bulgaria national team had a lead, 8:7 and 16:14, in the first set. With instruction of Zoran Terzić, Serbia’s head coach, Jovana Brakočević and co. turned a number of points on their side and took first set, 25:23.

With lead of 8:5 at first TTO, Serbia have started the second set.  After this TTO, only “one team have played volleyball”. Serbia have made a run 8:1, and at the second TTO, they had a lead 16:6. Bulgaria have to surrender and prepare for next set, 25:13.

Marcello Abbodanza, head coach of Bulgaria, gave different instructions to his team and Bulgarian girls have immplemented instructions on court for taking the first set at EuroVolley. Serbia had a lead after first TTO 8:7, but Bulgaria played better and won third set, 25:22.

In fourth set, Serbia returned their playing style from first two sets, but only when they reached 22 points. Then, Serbia side slow down, Bulgaria took the opportunity and in very dramatic finish tied the game with 30:28.

In tie-break, Bulgaria continued to play with more courage than Serbia and turned the game on their side 15:13.

But, it was difficult game like the both coaches said at press conference yesterday. The match lasted 138 minutes.

The best scorer was Jovana Brakočević with 23 points, while on the other side Strashimira Filipova finished with 20.

BUL M: Naydenov coach for the next...