The coaches of the six teams preparing for the playoff round and quarterfinals in Halle, Germany, set new goals for the second competition stage. The coaches still see room for improvement for the much-awaited knockout phase. 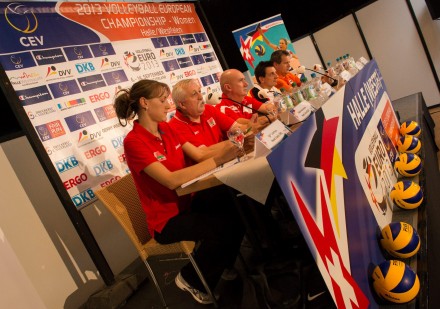 Belarus head coach Viktar Hancharou: „We have played in a tough group against world champions Russia, Croatia as well as Azerbaijan. We are glad that we reached the playoff round. Of course we want to go to Berlin, but we are realistic as well.”

Turkey head coach Massimo Barbolini: „We have shown good and bad things in the first part of the tournament. I hope to see only good things from my team now. Belarus is a tall team with strength in block and attack. But our target is still the same: the final four in Berlin.”

Germany head coach Giovanni Guidetti: „We played a strong preliminary round by improving our performance game by game. It will be a tough game in the quarterfinal. Both the Netherlands and Croatia are difficult teams to play with.”

The Netherlands head coach Gido Vermeulen: „We are a very young team. My players have shown many great moments so far, but we still have to improve some details of our game. Croatia represents a very experienced team.”

Croatia head coach Igor Lovrinov : „We cut a good figure in Dresden. I hope we will keep this performance in Halle/Westphalia. Of course the Netherlands are a strong opponent. It will be an interesting duel.”

Russia head coach Yuriy Marichev was not able to a ttend the press conference due to a delayed flight.

After a rest and travel day on Monday, the EuroVolley 2013 resumes on Tuesday with eight teams battling for the four remaining quarterfinal spots.