A memorial service was held in Tokyo on Friday for honorary vice-president and former 1st executive vice-president Yasutaka Matsudaira, who died on December 31 at the age of 81. The service was organised by two organisations that Matsudaira was closely associated with - the Japan Volleyball Association and the Japan Olympic Committee. 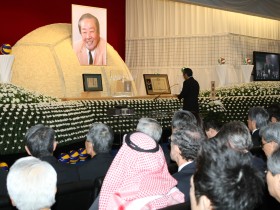 Involved with volleyball for most of his life, Mr Matsudaira played for Japan from 1954 to 1960, helping them clinch gold at the 1958 Asian Games. After retiring he went on to coach, sealing bronze at the 1964 Tokyo Olympic Games, silver at the 1968 Mexico Olympic Games before clinching gold at the 1972 Munich Olympic Games. He later became head of the Japan Volleyball Association.

Japan Volleyball Association President Taizaburo Nakano related Matsudaira’s final words: “I am very happy that I lived for volleyball. I did everything that I wanted to do, and I have no regrets in my life.”

BEL: Rousseaux does not go to Lokomotiv Baku

Who needs hands when we can use...