Linamar BÉKÉSCSABAI RSE won Hungary women’s national league for the very first time in their history as the final stage of the competition attracted an unprecedented crowd in their home town. The home heroines from Békéscsaba were cheered on by more than 1,800 fans before scoring a 3:2 (7-25, 25-23, 20-25, 25-16, 19-17) away victory to edge past Vasas-Obuda BUDAPEST and start their celebrations. 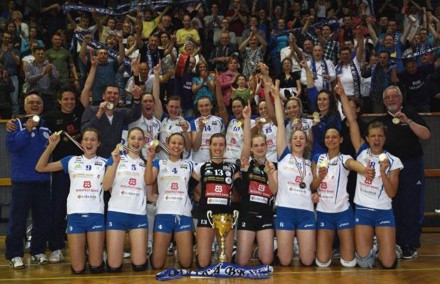 The winners were paced by Serbian-born Nevena Iričanin who scored 17 points while Zsanett Miklai top scored for Vasas, but her 20 points were not enough to bring it home for the team from Hungary’s capital city.

“My team delivered a superb performance as they have done throughout the whole season,” enthusiastically commented the head coach of Linamar, Mihaly Kormos.

The bronze medals went to TEVA GÖDÖLLŐI RC that cruised past Aluprof TF BUDAPEST in the classification matches for third and fourth place.

As they have done with the top teams of the men’s national league, the Hungarian Volleyball Federation distributed prize money at the end of this season, with 750,000 HUF (about 2,500 €) going to the winners, while 450,000 and 300,000 HUF respectively have been awarded to the second and third placed teams. With this unprecedented action, the Hungarian federation intends to raise the profile of the national league and reward the best teams for their efforts throughout the season that just drew to a close.