CHN: AVC Board of Administration meeting takes place in Beijing

The Asia Volleyball Confederation (AVC) Board of Administration held its annual meeting in Beijing, China on Tuesday under the chairmanship of AVC president Dr. Bin Nasser. FIVB President Jizhong Wei was a guest at the meeting. 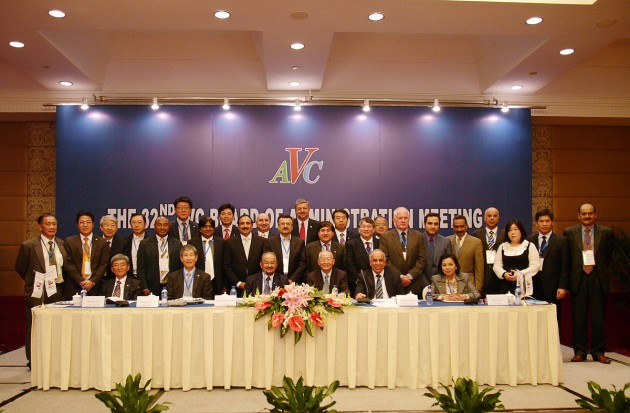 AVC president Dr. Nasser in his opening speech warmly welcomed President Wei saying his presence at the meeting “is a great support and inspiration to AVC”.

The AVC president noted that this “is the first meeting of the AVC new Board of Administration which will have detailed and frank discussions on how to develop and promote volleyball and beach volleyball in Asia, especially working together with national federations to promote grass roots volleyball relying on the tools of Park Volley, Mini Volley, School Volley and Mass Volley Festivals”.

President Wei, who presented an FIVB award during the meeting to former FIVB Medical Commission member for Yang Tianle for his contribution to the FIVB, said: “All the recent achievements of the FIVB are not realized on one-man working but on the collective work of all the FIVB family members.”

“I have stressed many times that I will serve only one term, make sure that money from sport is put back into sport and introduce a democratic system into the FIVB. The FIVB and the continental confederations are ready to enter a new era of development. My responsibility is to clear the way.”

The meeting observed one minute’s silence in memory of former AVC president Yasutaka Matsudaira of Japan, who passed away on December 31 at the age of 81.

The AVC B/A meeting heard reports and proposals from five zones and all the Technical Committees, and expressed their satisfaction with their work and proposals.

The meeting agreed to insist on the principles of transparency, democracy and sharing of duties; to work as a family to promote further volleyball and beach volleyball; continue to communicate with NFs in Category I and II and help them applying for the FIVB Development Fund; and to organize more technical and management seminars and courses for coaches, referees, teachers and players so as to improve their level and increase their management standards.