With just over two months to go before the start of the 2012 Olympic Games, the International Volleyball Federation (FIVB) can confirm which teams have qualified so far for women’s volleyball at the Olympic Games. 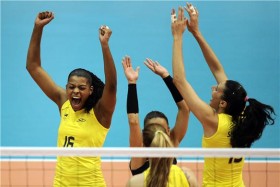 Brazil women qualified this weekend for the Olympics

Brazilian women’s team booked a ticket to London on Sunday confirming eight of the 12 teams in both genders.

The remaining four vacancies will be filled for women (one to the best Asia team and three to the best non-Asian teams) at a joint Asia Continental and World Olympic Qualification Tournament, which will take place in Tokyo, Japan from May 19-27.

ITA W: Guiggi Officially in Torino, Is Piccinini next?