The 2012 European Women’s Referees Seminar for Volleyball and Beach Volleyball that took place this past weekend in Sofia concurrently with the 2012 Olympic Games – European Qualification for men got together around 60 participants representing a total of 32 national federations. All attendees actively joined the seminar and contributed to the discussions and analyses performed there, so the seminar in Bulgaria’s capital city is to be seen as a major success. 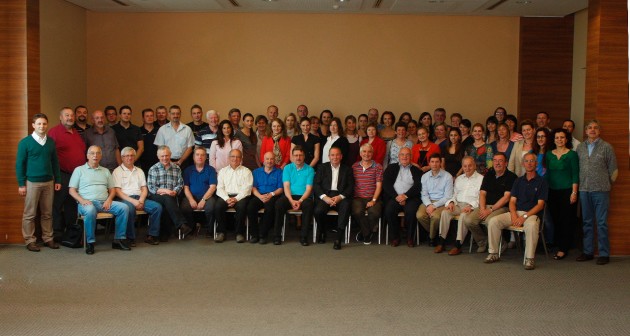 CEV President André Meyer attended the opening of the seminar stressing out his full support to female referees and the importance of such clinics. “We are proud of having achieved that much in the last few years as far as the promotion of female referees is concerned. Europe is a pioneer in this sense and setting the tone for such actions not only in Volleyball, but generally also in all other sports”.

With its ad-hoc concept worked out for the promotion of female referees, the European Refereeing Commission (ERC) once more proved its quality of visionary, as it had already done in the past via other innovative projects such as the regular training of Referees and Referee Delegates or the video verification system.

The general philosophy of the CEV and the FIVB about female referees was well received by the participants. With 18 national refereeing commission presidents among the attendees, the national federations made a strong commitment to work together with the CEV in promoting and supporting female referees.

“Short-term and long-term goals will be set by the respective national refereeing commissions and various projects will be launched,” one of the lecturers, CEV Development Coordinator Jonas Personeni, said. The different countries are coping with a heterogeneous background and hence face different challenges, all requiring ad-hoc actions and solutions. The CEV will fully support all national federations along the road to achieving their goals, and a progress report will help analyze the improvements in the coming years.

“The CEV would like to thank the Bulgarian Volleyball Federation for the great conditions we were provided with to organize this seminar” ERC President Jan Rek concludes.

RUS W: Osmokrovic on the way to Dinamo Moscow