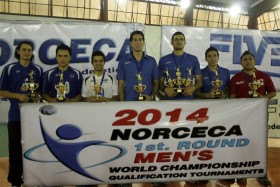 Salgado makes it pro in Europe

The 31 year old has been playing in Europe since 2003; “I’ve always dreamt of making a volleyball career, something rare in Honduras and the Central American region” he says with a paused voice but very excited to encourage others to take a chance.”

“My mind and heart were set to try; it took me two years before the Club Deportivo de la Universidad de Granada in the Spain’s Volleyball Super League gave me my first break”.

Luis Salgado had been studying with a sports scholarship in Universidad Tecnologica Centroamericana at Tegucigalpa and with determination decided to leave home.

The first obstacle he had to overcome was convincing recruiters that just because he came from a country that traditionally doesn’t practice volleyball didn’t mean he had the talent and then came his physical condition, which he believed was well, but not for a professional.

“I was pleased to be part of the Honduras national team for this elimination and it’s the first time for me to finish in first place with as part of a Senior National team”, the timing was right.

Salgado currently plays for the Pielavesi Sampo in Finland; he played four years in Spain and one in Switzerland.

NORCECA W: Nicaraguans get most of the awards