After last year they ended their campaign in fourth place, the players of the Czech women’s national team are ready to embark on their second adventure in the CEV Volleyball European League with the first round of play coming up this weekend at “Vodova” sports hall in Brno. 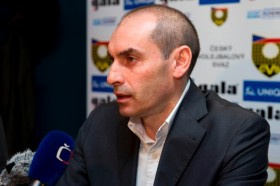 The President of the Czech Volleyball Federation, Dr. Zdenek Hanik, and head coach Carlo Parisi attended this past Thursday a press conference in Brno – together with local Lord Mayor Roman Onderka – to discuss plans and expectations for this competition with the Czech team having been assigned to a preliminary Pool that comprises also the Netherlands, Israel and Greece.

The group has been working together since this past April 30 under the guidance of Parisi, the Italian mentor that celebrated a memorable season with the team of Yamamay BUSTO ARSIZIO that swept all domestic competitions in Italy and seized also the trophy of the 2012 CEV Volleyball Cup.

The Czech Republic is already pre-qualified for the final four that will take place in Karlovy Vary in early July, and hence shall the Czechs finish atop of the standings in Pool C, also the second ranked team from that group will advance to the last stage of the competition. Together with the Czechs, the Netherlands stand out as the pre-favorite of the group after they recently delivered a good job at the Olympic qualifying event in Ankara, Turkey. The matches in Brno will run through June 1-3, with the Czechs playing first Israel, then Greece before they take on the “Oranjes”.