WL M: Argentina weekend end on a high with win over Portugal 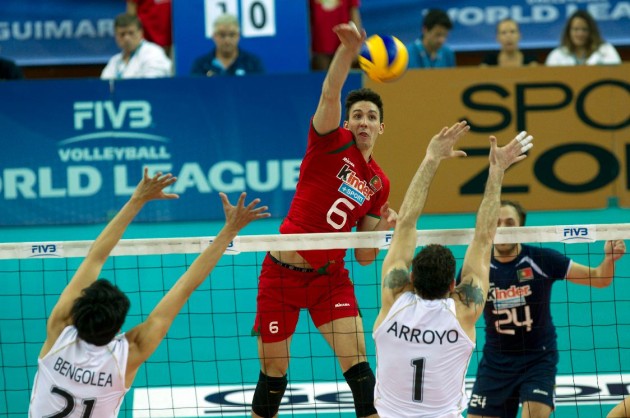 Alexandre Ferreira, from Portugal was the best scorer of the match, with 15 points while Cristian Poglajen, with 14 points was the best among Argentina.

Argentina began well as Juan Manuel Barrial‘s team quickly gained an advantage (8-4) and knew how to reinforce it (10-4). An ace from Tiago Violas brought Portugal closer (6-10), but the South Americans increased the gap further. Supported by an enthusiastic crowd, Portugal tried to react but the gap remained as Argentina took the set.

Portugal started the second well, and even though Argentina had balanced the game through an ace from Ivan Castellani, the team led by Flavio Gulinelli reached the first TTO with an 8-5 advantage. But Argentina recovered from 5-10 to 8-10 and Gulinelli was forced to call his players. The dialogue was effective and Rui Santos scored on the block for 13 points. And it was also Rui Santos that scored with an ace to take a 16-11 at the second TTO. Two consecutive blocks from Marcel Gil (18-11) led the way to victory in the set 25/18.

In the third set, an aggressive serve from Ruca and a block from Marcel (4-1) forced Barrial to ask for a time-out to regroup his players. Castellani, with an ace brought Argentina closer (6-7) but Flavio Cruz drew level at 8-all. Two consecutive blocks (from Alexandre Ferreira and Marcel Gil) and an attack granted Portugal a four-point advantage and two more successful blocks from Alex made the task harder for Argentina. However they bounced back to eventually take the set.

An individual block from Flavio Cruz and a failed attack from Mariano Giustiniano saw Portugal take the lead in the fourth. A moment of disruption from the home team and an ace from Poglajen allowed Argentina to catch up and tie at 15-all. Afterwards Argentina showed more calmness and went from 22-21 to 25-21 with little difficulty.