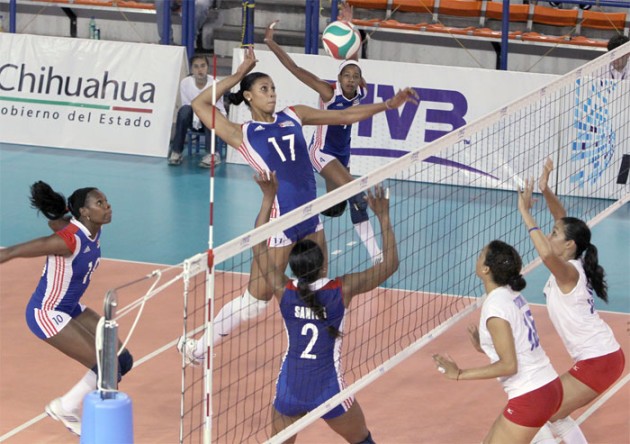 The winners, who arrived four hours before the match, established an overwhelming margin of 18-7 in the blocking department with Gyselle Silva leading the way with 7. Puerto Rico held a 7-1 advantage in the serves category.

Cuba’s Yanelis Santos, who registered 4 blocks, led the offense with 16 points, followed by Silva’s 14 and Yoana Palacios and Wilma Salas with 12 and 11 respectively. Puerto Rico’s Stephanie Enright finished with 14 and Daly Santana had 10, including 4 aces.

“I know they were so tired after a long trip. We played even against Cuba, and on the first set we started so fast. We are now with a young team, but for Puerto Rico it is very important to face this kind of great opponents”, stated Puerto Rico’s captain Jetzabel del Valle.

“I am happy with the win today. We recently landed here, after almost five days without training. We were a little bit out of focus, but as long as the match developed we got the points to win”, said Yusidey Silie about the Cuban team.

In the end it was Cuba’s strength that prevailed, recognized Puerto Rican coach David Aleman. “Despite Cuba’s had just arrived to the competition this was a very tough match, their strength was a key and in the end they dominated”, he said.

“Puerto Rico’s volleyball is almost similar to ours. The girls felt affected in the first set, but recovered. We won the match due to collective effort, a hard team work”, Juan Carlos Gala remarked about Cuba’s performance.