WC W: Red tears of happiness! World Cup title and a ticket to Rio are in China’s pocket! 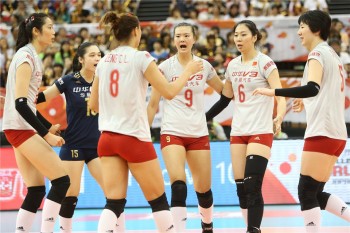 Oh what a game it was. Two hours and 15 minutes it lasted. The battle which meant everything. And China won it!

China defeated Russia in four sets and now needs only one more win to clinch the World Cup 2015 trophy and to qualify for the Olympic Games in Rio 2016! In the last round of the tournament, girls led by Lang Ping will play against the host Japan…

China and Russia played a fantastic match indeed. It started with a thrilling comeback by Zbornaya…

China had a huge lead in the opening set. At one moment it was 20:13 for the Reds, but Russia kept pushing and tied the score at 22:22! But, Zhu Ting prevented a full comeback of the opponent. She scored for 23:22 and for 24:23 with powerful spikes while then young Chinese star performed a strong block and won a set for her team – 25:23.

The second set was the only one which was completely one-sided. China dominated from the first to the last point and doubled the overall lead – 25:15, 2-0 in sets. But, Tatiana Kosheleva did not want to lose this game so easily.

Russian star was brilliant in the third set. Not just that she was scoring from every position, but she was constantly raising the morale of her team. At the end, it was Kosheleva who scored the last point in this set with a great block – 25:23, 2-1 in sets.

The clash between Zhu Ting and Tatiana Kosheleva continued in the fourth set. Two amazing players kept pushing their teams… All the way until it was all tied at 20:20. And then, a well-known Chinese block made difference. China scored 5 points in a row and 3 of them came after blocking! It was 25:20, 3-1 in sets. It was over.

Players in red jerseys fell on the floor. Some of them started crying from happiness, including Zhu Ting who was the top scorer of the match with 29 points.