CEV M: Finland clips European ticket as France has to wait for results of other group

France defeated Finland in the last day of action of its third-round qualifier (3:1; 25-22, 25-17, 24-26, and 25-21) with a performance that finally lived up to the expectations of the local audience in Saint-Jean d’Illac but nevertheless the “Suomis” finished atop of the charts in the group thereby qualifying for the final round of the 2012 CEV Junior Volleyball European Championship coming up in late August in Gdynia (Poland) and Randers (Denmark). 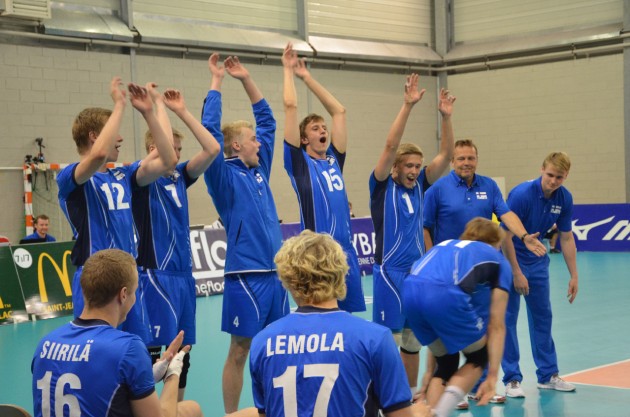 Since only the second ranked team with the best score among the two third-round Pools will make it there, the home guys of France will have to wait for the results of the last competition day in Zocca to know if they will be able to test out their likes with Europe’s elite. Anyway, tonight they were able to save their honor resulting from the silver medal the group claimed at last year’s Youth European Championship. “We showed a good performance” says captain Trévor Clevenot. “After our defeat to Ukraine, yesterday night we got together and we talked a lot. At least we can be proud that we have given it a try. If we do not make it to the European Champs, we will focus on the qualifications for next year’s Worlds in Turkey”.

In the other match of the day, even though they were still in contention for second place in the group, the guys from Ukraine lost 1:3 to Austria (21-25, 22-25, 25-22, 17-25). “We were sad since we missed our chances in the first two matches. Volleyball is still not a top sport in Austria but we are gradually developing. I think that next year we may have a chance to qualify for the World Champs” said Austrian head coach Michael Horvath who still had some positives to take from this experience.

NORCECA M: Argentina and USA to play for Men’s Pan Am Cup title