Poland is still unbeaten at the 2015 FIVB World Cup, having 10-0 score and coming so close to qualify for the Olympic Games next year! Polish team outplayed the host, Japan, but much harder than expected 3-1 (24-26, 27-25, 25-21, 25-19) and now it needs Russia’s win over USA to secure Rio already today. If not, it will have to win at least two sets against Italy in final round, tomorrow. 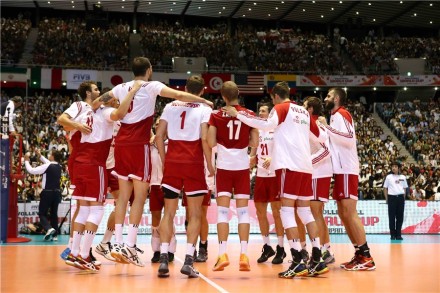 Japanese team knew that Poland could secure promotion to Rio Olympics in this game and wanted to make its way harder as possible. Of course, the help of packed stands in „Tokyo Metropolytan Gymnasium“ was an additional motivation. The things on the court streamed towards Japanese victory in Set 1 when it gained 11-7 after 4-0 run. Nevertheless, on 15-12, Polish guys collected enough strength to equalize on 17-17 with 5-2 run. Japan was up front again 20-18, but Poland managed to make a turnaround right on time 22-23. Still, Japan had the first set ball, converting the second 26-24. The star of the first set was Shimizu, scoring some of the most important points for Japan in the finish, including an ace for the first set ball.

Same story, but with different outcome occured in Set 2. Japan established dominance from the start thanks to Shimizu, getting 7-4 with 3-0 run. Poland managed to approach to 7-6, but the home side repelled oponent’s strike and took four-point lead 12-8. It maintained the gap in the next several points, but the the Polish machine began to work, making 5-1 run at 17-16 for the hosts to get an unreachable lead 21-18. By using ultimate efforrts, Japan came close 21-20, but Poland already took full control of the match, having Nowakowski and Kubiak as safe attacking options (22-20). Two consecutive points from Ishikawa and it was 22-all. European team needed three set balls to level, Buszek had the opportunity to convert all of them, 27-25.

The first set in which Poland had the result initiative from the start was Set No.3. On 5-all, the Poles took 8-6 and soon 14-10. Japan didn’t give up and came only to one point behind 14-13, but world champions were superb, getting back on a three-point gap 19-16. They didn’t let the lead slipping from their hands until the end 25-21. As the score shows, Poland took this set easier than last and in total, it played easier. Why? Kurek finally woke up and annulled Shimizu’s huge performance in all three sets.

Fourth set was the easiest for Poland as Kurek maintained a high level of play from previous set while Drzyzga opened several options in his team’s attack, setting perfectly to teammates 11-7. If there was a doubt on the winner, it disappeared on 14-8. Since Shimizu got tired, Ishikawa and Dekita took over for 21-18, but it was only a hitch by Japan. Kubiak and Nowakowski finished it 25-19.

Run, Kovač, run! Head coach of Iran wants to save ball with his libero (VIDEO)