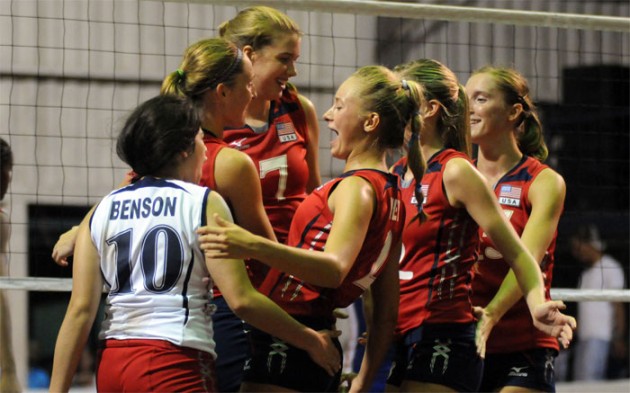 The winners capitalized on Cuba’s 34 errors and held an 11-4 margin in blocks and 5-2 in serving aces.

“We knew the importance of this match,” USA captain Kelsey Humphreys said. “It is a happy moment and they did put up a battle; we didn’t get our rhythm until the second set as we were inconsistent in the first.”

Sulian Matienzo Captain of Cuba said to be satisfied. “Our level has improved, we were too confident after the first set and they took advantage of the situation.”

“As the tournament evolves I believe we’ll face Cuba in the final match,” USA coach Rodney Wilde said. “They had very difficult serves in the first set, but I’m glad with the team because this was our second international match and they weren’t mentally prepared to face such a high quality team like Cuba that’s the reason for the result in the first set.”

Cuban coach Wilfredo Robinson said: “I congratulate USA for their victory. the Cuban team was doing well in its defense and attack during the first set but from there on we began to deal with the Americans high tactical level. They have very intelligent players.”

NORCECA W: Dominican Republic wins Pool B at NORCECA U-20

RUS M: Alekno made his decision