After amazing fourth set in Belgrade, when Serbia had 17-12 and then Brazil took the leadership 22-19, the hosts have celebrated the new, fourth win in the FIVB World League 2016 Group 1. 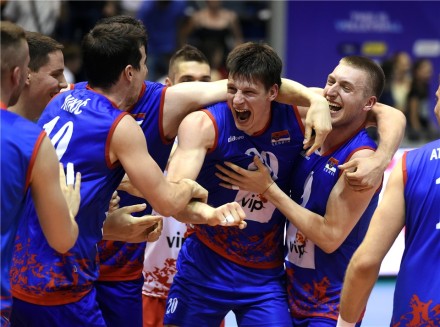 Serbia scored another big win in the World League. Tonight, in the second match of the day at the tournament of Group 1 in Belgrade, team of coach Nikola Grbić has defeated Brazil who had its chance in the fourth set.

After Brazil took the first set, Serbia won the second one with the big difference 25-15. In the third set the hosts again was better and in the fourth as we already wrote was a real drama.

Serbia led 17-12, Brazil made a series of 8-1 with the good service (20-18) then took the leadership of 22-19 and stopped. Srećko Lisinac went on the service line and the match was ended. He scored few aces and Miloš Nikić was unstoppable on the net, Brazil made some mistakes and Serbia won this set 25:22 (6-0 series).

Srećko Lisinac was MVP of the match with 18 points followed by Aleksandar Atanasijević 16. On the other side Ricardo Lucarelli scored 18 points and Wallace 14.

WL: Another thriller in Finland with same...