Slovakia women’s national team will be fighting this weekend in Poprad, in front of the home audience, for a spot to qualify for the final round of the 2013 CEV Volleyball European Championship by hosting the teams of Israel, Sweden and Spain. The second round robin will follow one week later in Israel. 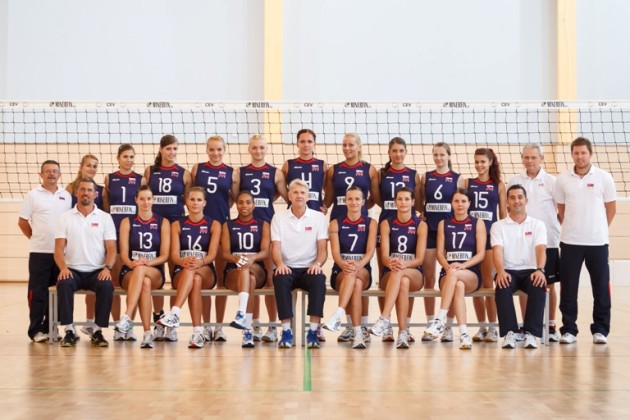 With Miroslav Cada being at the helm of the group for the eleventh consecutive year, the team started their preparations in Slovakia, then played four matches against Azerbaijan in Baku and finished their fine-tuning in Poprad by playing there Poland’s vice champion, Bank BPS Fakro MUSZYNA, and beating twice Hungary’s national team (3:0 and 3:1).

“I am satisfied with our preparations. The matches showed me that we have a very balanced team and it will be difficult to choose the starting six. All players currently in the team are able to play a solid role in the upcoming matches. We played very good in attack, but I am not so satisfied with our defense. We are trying to fix some problems in the last trainings” says the Czech-born head coach.

The venue of the first round robin, the Arena Poprad, is situated in a beautiful scenario close to the High Tatras. “We are very satisfied with the conditions here. I think this is the best arena for Volleyball in Slovakia. We are happy that we will play at home after a long time and want to use this advantage. I hope our fans will help us” said Cada who currently works with 13 players and will announce his final nominations on Wednesday evening. With a capacity of 2,000 fans, the Arena Poprad has been playing home to the last international campaigns of Slovakia men’s national team and shall be a good omen also for the ladies.

Slovakia missed out on a ticket for the final round in 2011 after finishing third in the second-round qualifier they were assigned to. Slovakia had traveled to Severodonetsk, Ukraine, venue of the first round robin, only a few hours before the start of the tournament and was sidelined by this rush due to a flight that had to return back to Vienna only a few minutes after departure. Slovakia opened their campaign leading 2:0 in the match with Israel but eventually lost 2:3.

“This can happen, it is history and we have to look forward” says Cada who thinks Spain and Israel will be tough opponents. “They play each other on the first day and so we will carefully study their game. It is important for us to start well against Sweden and win the first game” he concludes.

Switzerland: The results of the last qualifying...