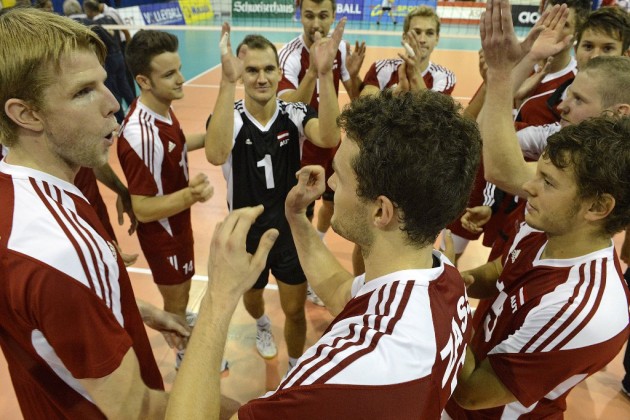 The game was played in front of 1,200 spectators with the income from the tickets going to a special charity supporting children suffering of cancer.

Cheered also by many VIPs from the stands, the Austrians fought bravely for five sets and finally brought it home by showing good figures in blocking as well as from the serving line. Head coach Michael Warm was evidently happy with the result, especially since the players were feeling the pressure stemming from this home debut: “It was a very difficult match and this victory means pretty much also for the future” he says.

Top scorer Thomas Zass adds: “The first match of such a tournament is always somehow special. The result is fair and if we can show our full potential on Friday and Saturday as we play Croatia and the Czech Republic, I think something more can follow”. He was monitored by Stelian Moculescu, who will be his mentor in the coming season as the guy from Tirol has moved to VfB FRIEDRICHSHAFEN: “He has been developing quite positively and he played a good match”.

THIS IS VOLLEYBALL: Big heart of Kim...