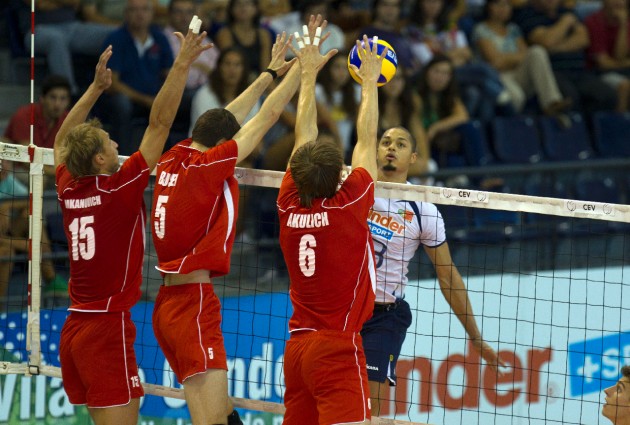 Portugal woke up a way too late in their match with Belarus and will need to score a win on Sunday against Turkey not to compromise their chances to make it to the final round of the 2013 European Championship. Supported by the local crowd, the home heroes committed a way too many mistakes in the first two sets and were not able to complete their comeback in set 3. Belarus went up 8:5 in the first set by taking five points from errors of Portugal; after cruising to the provisional 12:6, the Belarusian side was once more helped by the mistakes of the local heroes (16:11, 20:14) and Siarhei Busel killed a spike for the final 25-19. Belarus practically made no mistakes in set 2 and sailed to the final 25-20 with ease with the score being sealed by an ace of Pavel Audochanka. Portugal’s flurry of mistakes did not stop in set 3 and even though they were fired up by the audience, the hosts could not bring it home, with Belarus celebrating a classy 3:0 win. Alexandre Ferreira and Joao Jose top scored for Portugal with 14 and 12 points while Siarhei Antanovich and Siarhei Busel paced Belarus with 10 apiece.

“I am very happy that today we could celebrate our first win against Portugal” said Belarusian mentor Viktor Sidelnikov. “They surely did not play their best but we were good in profiting of this and win the game. The third set was very close but we brought it home thereby reinforcing our leadership in the group”.

“We made many mistakes and we got into the game only halfway through the second set and in the third. We have a very important match with Turkey on Sunday that we need to win to finish second before we travel next week to Ankara. We need the right boost of confidence and shall not wait for the result of the other match” stressed home mentor Flavio Gulinelli.

After losing only at the tie-break to Portugal on Friday, Great Britain created another surprise by besting Turkey in five sets. Turkey actually started well powered by Emre Batur and set the pace of the game all the way through in the opening set (8:7, 12:9, 25-17). Great Britain went up by the slimmest margin at both mandatory stops of the second set but then broke away (20:16, 23:19) before Dami Bakare scored the last couple of rallies of the set. Great Britain flipped the score around from 3:5 to 8:5 in set 3 and once more accelerated the pace (14:10, 16:11) with Bakare on fire (19:14). Burutay Subasi tried to fire Turkey’s comeback (21:18) but Team GB did not slow down and went for the 2:1 (25-20). Things changed dramatically in set 4 where Turkey moved to the front (8:5, 16:9) and dominated the final section of the set for a massive 25-13 that called for the tie-break. There Turkey got up 8:7 but Team GB drew level at 13 before a never ending battle unfolded and the 2012 Olympians could finish it off with the incredible score of 26-24. Bakare amassed a total of 30 points for Team GB while Emre Batur registered 25 for Turkey.

“I am just thrilled especially since we displayed our best play with the exception of the fourth set. We always believed in our chances and ended up by beating a strong Turkish team” said an evidently happy GB coach Joel Banks.

“I am evidently sad because the team played well only in the fourth set and we thought we could close the match in our favor but were unable to do so” stated Veljko Basic, the head coach of Turkey.

EC W: Slovak ladies lose to Spain but remain atop of the charts in Pool A