Trentino Diatec won an epic battle against Sada Cruzeiro of Brazil in five thrilling sets 3:2 in Pool A of the Men’s FIVB Club World Championship in Doha. Jan Stokr and Osmany Juantorena led Trentino with 21 and 20 points. This and other volleyball news read on Worldofvolley.com. 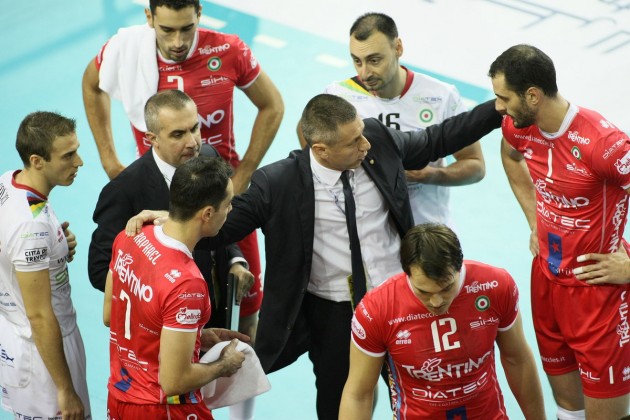 Matteo Burgsthaler scored with a block against Wallace De Souza for the final point of the prolonged battle that lasted 2 hours and 4 minutes. Trentino led in blocks 13-8 while Sada Cruzeiro held the advantage in aces 10-6.

Osmany Juantorena scored two aces and one block while Birarelli added two blocks and one spike as Trentino Diatec jumped to a 6-3 lead forcing a time-out. After a long service by Juantorena,  Kaziyski landed his spike and Birarelli added another ace for an 8-4 score at the TTO. When play resumed Sada Cruzeiro’s De Souza responded with a kill and two thundering aces to close within one-point at 8-7. At 11-9, Stokr and De Souza traded spikes and Juantorena nailed another bomb. Birarelli added his third block and a spike en route to a 16-12 lead for Trentino. When Raphael Vieira blocked for a 19-14 score, Sada Cruzeiro’s coach called for time-out. Yadier Sanchez hit off Trentino’s block but Juantorena kept hammering. Yoandy Leal scored for the South American side and the spike of Kaziyski landed out for a 22-19 score. Juantorena made an attacking error and the difference was reduced to just two points. Stokr planted one from the right side and Kaziyski scored with a tip over Sada Cruzeiro block for set-point at 24-20. De Souza scored twice around an erratic attack of Trentino for a 24-23 score and Stokr finally closed the set in favor of Trentino 25-23.

Trentino held a slight 8-7 difference in the second set when the strong serve of Kaziyski came back to their side where Tzourits scored easily from the center of the net. Sada Cruzeiro’s Ferraz tied up at 9-all. Juantorena landed one from the back line but Marcos Leal attacked down the middle to keep the score locked at 13-13. De Souza served a laser shot but then continued with a very long serve. Stokr hit an ace for Trentino but Yoandy Leal equalized at 15-all. Trentino led 16-15 thanks to a violation at the net from Sada Cruzeiro. De Souza tied the score for Sada Cruzeiro at 18-18 and Stokr hit out of bounds. Juantorena tied at 19 and Vieira continued with an ace. Trailing 22-20, Cordeiro closed in Sada with his spike and then Juantorena mishandled the serve of the same Cordeiro for a tie at 22-all. Stokr responded for the Italian club but Birarelli crashed his serve. Kaziyski spiked for set-point at 24-23 but Stokr served long. Ferraz hit off Trentino’s block for set point 25-24 and Yoandy Leal hit a smash for the 26-24 in favor of Sada Cruzeiro.

The wide spike from De Souza gave Trentino the lead 8-7 in the third set. Juantorena landed two spikes around an error of Sada Cruzeiro but De Souza managed to score with a touch off Trentino’s block. Ferraz served an ace but netted the next one. Kaziyski gave Trentino a two-point margin at 14-12. Stokr nailed one right-hander for the 16-14 score for the Italian club force. Yadier Sanchez helped Sada Cruzeiro to tie the score with a spike and a block against Juantorena. At 20-20, Marcos Leal scored via a quick attack from the center but Kaziyski came back with a cannon-shot. Stokr netted his serve and Marcos Leal again scored for a 23-21 advantage. Yoandy Leal served long but De Souza scored for set-point at 24-22. Juantorena kept his team alive with a bomb just on the back line and Birarellli blocked Ferraz for the tie at 24-all. Juantorena scored for set-point and Birarelli once again blocked Ferraz for the 26-24.

Sada Cruzeiro jumped in front 5-0 behind two soft spikes of De Souza and the block of Ferraz against Stokr. Kaziyski put Trentino on the board with a hard smash but then served too long. Yoandy Leal hit a smash off the shoulder of Kaziyski and Marcos Leal followed with his own spike for an 8-2 advantage. At 9-4 De Souza served his fifth and sixth aces of the match. Sada Cruzeiro continued with the torrid attack and led 14-5. The Brazilian club was in front by nine points (16-7) at the second TTO. Juantorena contributed to shorten the distance to five points (20-15) with spike and ace but Yadier Sanchez snapped the streak. Uchitov and Ferraz exchanged spikes. Sanchez’s ace for set-point at 24-18 and then his serve sailed away. Lanza netted his serve and we had a tie-breaker.

Birarelli gave Trentino a 3-1 lead in the tie-breaker. Juantorena served long but then Stokr hit one just on the line. Stokr sent Trentino to a 5-3 advantage but Yoandy Leal hit another thundering spike for Sada Cruzeiro. Yoandy served long but Marcos Leal amended with his spike. Yoandy tied up the score at 6-all with a spike down the middle. Ferraz hit against the block for a 7-6 South American lead. Marcos Leal failed with the serve as also did Burgsthaler. Juantorena hit a dynamite shot for the tie at 8-8 only that Ferraz also did that from the Brazilian side. Stokr located well his soft spike but Kaziyski ended a long rally failing his spike. At 11-all Burgsthaler blocked Marcos Leal but De Souza kept scoring. Yoandy Leal’s serve sailed long but Kaziyski also failed his serve. At 13-all, Juantorena was blocked by Cordeiro but Marcos Leal failed his serve. Juantorena scored off the block for match-point but Burgsthaler missed again with the floating serve. De Souza scored but also Stokr. Juantorean and De Souza traded spikes. Stokr hit one from an incredible angle parallel with the net but Yoandy tied again. Birarelli gave Trentino another chance but Stokr’s attack was wide. Stokr’s hit produced another opportunity for Trentino. The Italian club finally won the battle when Burgsthaler blocked De Souza for 21-19.

ESP W: Another victim of economy –...