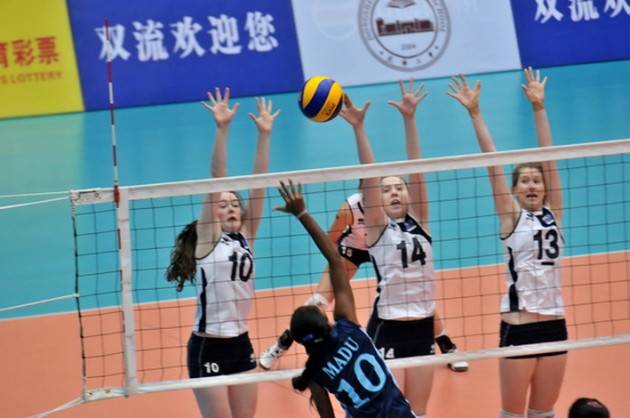 The Australian side turned things over after a fateful first set of the Pool H match on Tuesday. They committed many errors and could not set up their plays to attack properly. Sri Lanka possessed the skills to position for an attack while Australia mostly sent the ball across for safety. Sri Lankan Setter D.H.Vinodi was effective in controlling the Sri Lankans’ offensive pace with kills coming from hitters M. Thaksala and P.K. Lakasahani.

The Australians realised their edge in height and started working on their blocks by the second set. Katie Jackson performed her duties on the net to deflect the opponents’ offense.  They likewise improved on their floor defence to respond to the opposing team’s drop attacks. While the Sri Lankan girls scored several aces, the Australian defenders optimised  their blocking skills to equalise the match.

Australia continued to commit errors but captain Phoebe Bell tried to maintain her team’s composure with her spikes. Louise Alford also found her groove and sent some attacks to the Sri Lankan side as well. The Australian team’s renewed aggressiveness in offense paid off as they took the third set away from the Sri Lankans at 26-24.

Bell’s leadership on the court shone through in crucial plays of sets four, just when Sri Lanka tried to inch closer once again. Australia showed better control of their endgame to seize set four and the match.

Bell scored a total of 12 points, with Jackson contributing another 10 points for Australia’s first win in the tournament.