POL M: Everything is set for memorable Volleyball show in Rzeszow

There are only a few hours left until first round of a very exciting battle between Asseco Resovia RZESZOW and Lube Banca Marche MACERATA in the Playoffs 12 of the 2013 CEV Volleyball Champions League. Read the latest news from volleyball world on worldofvolley.com. 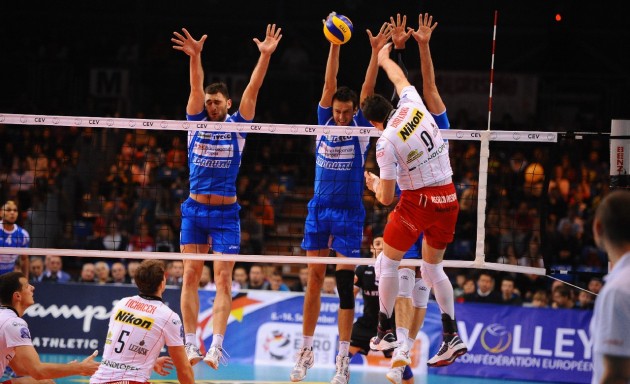 Asseco Resovia and Lube Banca Marche have something in common starting from the white-red corporate colors, great sponsors and very dedicated fans. Last year both teams were able to defeat their biggest rivals (PGE Skra BELCHATOW and Itas Diatec TRENTINO respectively) in the final and most important stage of the season claiming their respective national leagues. This time they are looking for an even more successful outcome at the end of the season and their ambition is to seize a place among the best teams in Europe. They are supposed to contribute an unforgettable Volleyball show first in Rzeszow and later on in Macerata but only one will eventually make it to the next round.

Both teams have been playing good Volleyball recently. Asseco Resovia after a series of victories in the Polish League (this past Saturday RZESZOW defeated in an away game Wkret-met AZS CZESTOCHOWA in straight sets) moved up to fourth place in the standings. On the other hand, the Italian champions from Macerata claimed on Saturday a very important away victory against Copra Elior PIACENZA (3:1) claiming the second spot of the rankings with the same points of current leader TRENTINO Diatec.

Moreover, both teams are sidelined by the injuries. The star-studded Lube Banca Marche MACERATA has to play without two great Italian outside hitters, Cristian Savani and Jiri Kovar, while Asseco Resovia can’t count at the moment on the main opposite of the Polish national team – Zbigniew Bartman. Also another key player of Asseco Resovia – team captain Aleh Akhrem – had recently some problems with his knee but he came back to the practices and will be in the roster for the games with MACERATA. Although the first game in Rzeszow won’t be yet decisive both teams are aware of the fact that this match can somehow set up this interesting competition and give the victorious team some more confidence before the return game in Macerata.

Moreover, Asseco Resovia players will try to break their negative record in matches against Italian teams as in the last few years in the European Cups their club was defeated by Pallavolo MODENA (2008), TRENTINO Volley (2010), Sisley TREVISO (2011) and Bre Banca Lannutti CUNEO (2012).

“Asseco Resovia is, without any doubt, a good team, full of high-quality players, with a great sports hall and much experience gained from the international arena which can be considered as their additional weapon. They are playing better at the moment comparing to the earlier stage of the season thus it should be an additional spur for us to start this game in Poland with appropriate determination because this will be a tough game full of emotions and tension. During the last two weeks we were practicing a lot and even though we are still without Jiri Kovar and Cristian Savani, with Sasa Starovic and Dick Kooy we have some other tactical options. The fact that Resovia didn’t win a game against Italian teams in the last few years doesn’t count at all. It’s a strong opponent and it will be a very difficult task for us to advance to the Playoffs 6 but we want to achieve this goal at any cost” stated Alberto Giuliani, Lube Banca Marche MACERATA head coach.

“It’s going to be a very tough battle for us at this stage of the Champions League because we are facing a team full of players with great experience from the international arena, some of them also from the Italian league. In my opinion the fact that we will be playing the return game at home can’t be considered as an advantage because in the Playoffs of the Champions League you have to win both games and I feel that this first match in Poland will be the most important even though it won’t be yet decisive. I think that on Tuesday the pressure will be on the Polish team because they are playing at home. However, the victory will be our objective. The 2013 CEV Volleyball Champions League is a very important competition for us and we are determined to seize the promotion to the next round without the necessity to play a golden set which is always a lottery” added Simone Parodi, Lube Banca Marche MACERATA outside hitter.

“Obviously this duel consists of two matches but at first our main focus in on Tuesday game in Rzeszow. Many people think that this game will be decisive but when we look at the regulations even in case of a defeat at home we won’t lose our chance. I remember that last year during the finals of the CEV Volleyball Cup against Dinamo MOSCOW although we lost the first leg in Rzeszow, in the return game in Russia we were very close to the victory. We couldn’t have any special preparations to this tough battle against Lube Banca because we’ve been playing a lot of games and we were trying to take it match after match. We also had some health problems due to the injuries of Bartman and Akhrem but before the season we formed a wide team full of players ready to help us and to raise our level of play whenever we need them. The other thing is that often such difficult situations like injuries can unite the team and shape its character” noticed the mentor of RZESZOW, Andrzej Kowal.

“MACERATA is a very powerful and great team. It would be wonderful for us to win this first leg at home considering also the fact that our team lost a couple of games against Italian teams and we are very determined to overturn this negative record. We will do everything which is possible in order to set up a great Volleyball show for our fans and seize this important victory. I think that before the game both teams have the same chances. Moreover, we can count on our supporters and we are confident that they will help us a lot. We have already some experience from the games against Italian teams. This season in the League Round of the CEV Volleyball Champions League we were playing against Bre Banca Lannutti CUNEO. We lost those games but in my opinion at this moment we are in a better shape. We made some progress since the beginning of the season and we are ready for a big battle against Lube Banca Marche MACERATA that is, probably, an even stronger team than CUNEO” stressed Aleh Akhrem, the captain of Asseco Resovia RZESZOW.

“For us players, for our club, coaches, supporters and the whole local community in Rzeszow it’s going to be a great event and big Volleyball fiesta. We have to stand MACERATA by playing our best Volleyball. We should treat this game as a great spectacle and show on the court; it is a joy to be part of this. If we show this attitude, the result will be very open. I truly believe that we are capable of winning this first leg at home and so gain a little advantage before the return game in Macerata. In my opinion the key match for us will be on Tuesday in Rzeszow” concluded Maciej Dobrowolski, Asseco Resovia setter.