Middle blocker Milena Stacchiotti was the very last transfer finalized by Poland’s Tauron MKS DABROWA GORNICZA for the 2012/2013 season as the team had set very high goals for the domestic competitions as well as for its campaign in the European Cups. 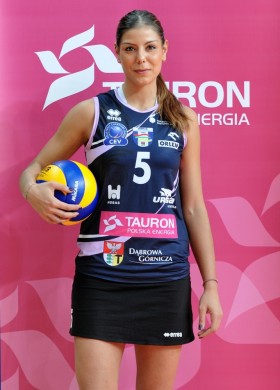 The 27-year old Stacchiotti previously played in Italy and namely in Verona but had already enjoyed the opportunity to travel to Poland quite a few times. “Last year I came to Poland a few times as my boyfriend (Michal Lasko) was playing for JASTRZEBSKI Wegiel. I came to attend some matches and support him from the stands. We also went to Wroclaw, the city where Michal was born before his family moved to Italy”.

As she got to Dabrowa Gornicza, she needed some time to adjust to the local conditions. “It was not that easy to interact with other people as Italian and English are sometimes not enough. Anyway, I have started learning Polish because this is an opportunity to get to know something different. I know only a few words, like for instance “dzien dobry” (good morning), but Magdalena Sliwa and Ivana Plchotova have been very helpful and supporting my efforts. We knew each other from the time they played in Italy. I do like Polish people though they are initially a little shy, but then they turn into very friendly and talkative once you get to know them better” Stacchiotti says.

She has turned into a very valuable addition to the group, being very eclectic and flexible. With a background in Beach Volleyball, she’s very solid in reception and though she started out playing as middle blocker, she was eventually moved to the backline to compensate for the injury of local libero Krystyna Strasz. “It was a little strange for me as the coach decided to change my position. However, I am happy to represent this club and I am very excited with this place and the people I have met here. Tauron MKS is a team that always plays for the best result and I think in the end this season will turn into a very valuable experience” concludes the 185 cm tall player.