POL: Andrzej Lemek Chairman of the judges Department of PZPS

Andrzej Lemek is the Chairman of the judges Department of the Polish Volleyball Federation. He received 161 votes and his opponent, Andrzej Kiszczak 50. 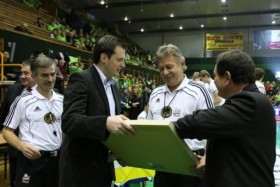 He held this position also from 2008-2012. “The next four years will be special. At that time Poland will host the men’s World Championship, world championship in beach volleyball, junior championships, and will organize the European Championship for Men together with Denmark” Andrzej Lemek said.

57-year-old judge Andrzej Lemek completed the course in 1977. In 1985 he completed a course in Bialystok Candidate at the central level. Three years later he was already in the league matches.

In 1991 he received international class.

Andrzej Lemek choice was made in Wieliczka, where Polish championship was played.