There will be a big celebration in Belchatow this evening! Because, Skra has done it! Poles are going to the Playoffs 6 of the CEV Champions League! 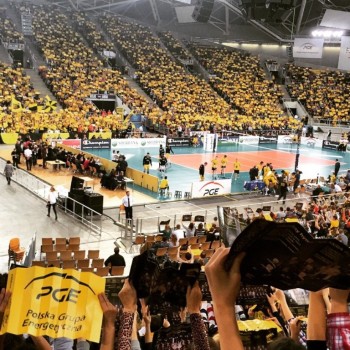 In the rematch between PGE Skra Belchatow and Lube, Polish team needed only two sets to advance through. They took all three of them! On the other side Italians have eliminated from the competition, despite a really great game in Atlas Arena.

The opening set was very, very exciting. Lube acquired the first “big” lead and escaped to 14:11, but Skra took the next three points and tied the game at 14:14. Everything remained the same until 21:21, when Skra took two points in a row! Home team firstly used a counter-attack for 22:21, while in the very next play Bartosz Kurek spiked the ball into the net and it was 23:21 for the Poles.

But, it was not over. Lube answered by taking the following point for 23:22 and then Kurek scored from a counter for 23:23! Skra scored next, Lube saved the first set ball… But not the second.  At the result of 25:24 for the home team, Nicolas Marechal made an ace! 26:24! Skra needed one more set to advance to the Playoffs 6!

Pierwszy do przodu ! more than volleyball more than passion ! #pgeskra#cev#cevvolleyball#atlasarena#LM#ChampionsLeague#cucinelubetreia

Crowd in packed Atlas Arena hoped that it would happen already in the second set, but Lube had to disappoint them.  Italians played a perfect set. They were up ahead by 7 already at the second TTO – 16:9. It was just a routine finishing for a team such as Lube – 25:19. All tied in sets, 1-1.

However, Italians only delayed the final defeat. Because the third set decided everything. Skra acquired very important lead in the middle of the set. Nicolas Marechal made and ace for 13:10, then Srećko Lisinac did the same for 15:11. A four-point margin remained until 19:15, when Lube made the last attempt to stay “alive”. Giulio Sabbi made one of the strongest spikes in this game for 19:16, Simone Parodi scored an ace for 19:17, while Bartosz Kurek completed a three-point run for 19:18!

Mariusz Wlazly managed to break the run of Lube, and Skra went on 20:18… Then, perhaps the crucial point. It was the longest rally of the game with many great defenses, and it was finished with a smart spike by Facundo Conte! 21:18! Belchatow crew then made a great block for 22:18, while Wlazly scored once again afterward – 23:18. Eventually Facundo Conte made the last point in the third set. Skra won by 25:22, and collected everything it needed in this match.

But to make everything even better, boys of Miguel Falasca took the third set as well.