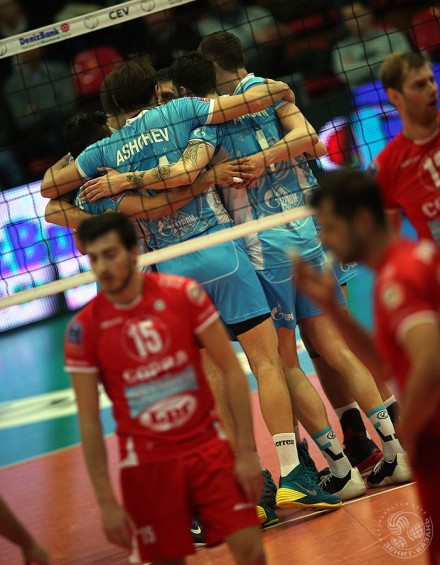 The match started with the confusion on both sides. The first point lasted surprisingly long (1-0 for Zenit). Piacenza equalized after bad communication between León and Gutsalyuk. Both wanted to spike!

Marouf distributed balls evenly and perfectly at the same time and opened all the options in Zenit’s attack (8-3). It’s interesting that Poey scored 2 out of those 3 points for Piacenza.

Marouf than concentrated his sets on Anderson and made him as the main option in the attack (10-4).

Came the period of bad serving from both teams, but Zenit maintained serious gap (12-7). Another interesting fact. Four serves out of last 5 at this result ended with errors!

Gutsalyuk gave hard time to the guests with serves (16-8). It was the signal for coach Radici to change Massari with Ter Horst. He had to try to fix the reception of his team but it didn’t happen. Anderson continued with powerful and precise spikes (19-11).

When Anderson scored two consecutive aces, everything was ready for the second set (21-11). Final result was 25-13.

Piacenza’s players knew they need to win the second set in order to keep their chances alive for the Golden Set. And that’s how they started this part of the game.

Tavares’ clever float serves were uncatchable for Zenit’s receivers, especially for Mikhailov (1-5)! León’s spike from way behind the 3rd meter line gave hope to Zenit (4-7). It was even 6-8, but soon Piacenza returned the gap (6-10).

Zenit’s attacks were predictable so Kobzar had to replace Marouf. At the result 12-16, Zlatanov lost concentartion in receiving Anderson’s serves and it was 15-16!

Spectacular block by León on his compatriot Poey for 18-19 seemed as the turning point for the Russian team because Zenit scored 3 points in a row at 19-22 and equalized (22-22).

It looked like losing the second set made Zenit’s players angry. They demolished the opponents in the third!

On 3-0 lead for the hosts, Radici was forced to calm down his proteges, but it didn’t work. Mikhailov was breaking the reception of the guests. Zlatanov showed weakness again and was replaced by veteran Papi on 6-0!

Mikhailov didn’t stop only on serving, his attacks were unstoppable (7-1).

Soon it was 10-2 and 21-12. Every segment in Zenit’s play was perfect. On the other side, Poey, the main hope of Piacenza, got tired and deconcentrated.

Interesting situation happened at the result of 21-12. Marouf hung on to the net while landing. It was totally needlessly from the Iranian setter. It caused a break in Kazan of couple of minutes because he damaged the top of the net which had to be repaired.

Anyway, the 3rd set was one-sided – 25-14 for Zenit who at that point of the game secured participation in Playoff 6 and the clash against the Champions League runner-up, Halkbank Ankara!

The rest of the match was friendly. Alekno changed all the main players, Radici kept some. Even in that constellation of forces, Zenit was better but only after the tie-break.