Big surprise at the beginning of the Playoffs 6! Asseco Resovia has defeated Lokomotiv Novosibirsk on the road by 3-1! 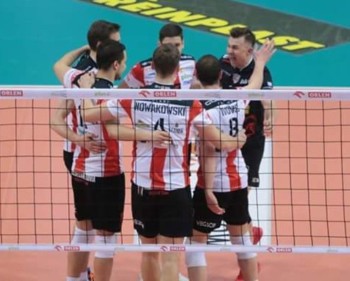 Home side had the better opening of the match and went ahead at 10:7. However, then Marko Ivović started his show in the first set. With fantastic serves of the Serbian international, Asseco Resovia made 6:0 run and made a complete turnaround – 13:10! Unfortunately for the Polish team, those were their best moments in this set. Lokomotiv quickly regained control over the match and regained the lead as well.

But, reaction of Resovia was express. Away side had the lead almost throughout the whole second set, and eventually made the perfect finishing.  At 21:19 for the Poles, Russell Holmes blocked Denis Zemchenok for 22:19, while then Marko Ivović did the same to Oreol Camejo – 23:19. It is important to mention that both blocks came after great serves of Nikolay Penchev. There were not a single chance for any major comeback – 25:21 for Resovia and 1-1 in sets!

Artem Volvich decreased the margin to 24:23, and then Jochen Schops sent the ball out of bounds – 24:24! Resovia missed both set points, but that did not break a spirit of Marko Ivović. Serbian player scored next 4 points of his team! Four! He was unstoppable, but Lokomotiv always managed to answer back and tie the game… All the way until that fourth point of Ivović, which brought Resovia in front at 28:27. This time it was over. Denis Zemchenok sent the ball far outside the court – 29:17, 2-1 for Asseco Resovia!

The Poles simply started to fly all over the court after that. It was 10:6, then 12:18, and finally Piotr Nowakowski gave the final touch to this big win of Resovia. He made two strong spikes for 14:8, and then he blocked Artem Volvich for 15:8! Away side performed a routine finishing and Jochen Shops scored the last point for 25:17, 3-1!

She could not wait to enter the game (VIDEO)

This is European Cup not Plusliga, so all fans from Poland support our teams.