On Saturday Małgorzata Glinka-Mogentale will start competing in her sixth Champions League Final Four tournament, fighting for the third title. 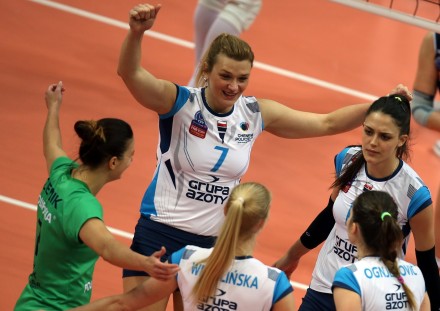 So far she played in this most important European club competition five times, and only one time she didn’t win a medal. Malgorzata Glinka will start her sixth final tournament on Saturday. Among four of the best European teams, which will come to Poland for the “Easter” contest, is the VakifBank Istanbul – considered to be the favorite. It is the Giovanni Guidetti‘s team that popular “Maggie” won the Champions League twice (2011, 2013) with. The first title was the most precious one.

“It was my first season after maternity leave, and additionally I was chosen MVP of the final tournament. It couldn’t be any better, in fact sometimes you have to wait your whole career to win the Champions League, or you don’t win it at all” said Malgorzata Glinka.

The second triumph with VakifBank came few months before signing a contract with Chemik Police. During that season the Turkish team was a true dominator. It didn’t lose a game and finished with a triple crown – the Turkish Cup, Champions League and Turkish championship.

“The first victory with VakifBank could be treated as a suprise. We were not a team with great names onboard. Two years later, with no defeats, no one could doubt that we were the best team in Europe. At the same time we made VakifBank Istanbul the only Turkish team to win Champions League twice” she commented.

The second victory season was a series of almost 50 straight wins. Because of the physical and mental load Malgorzata Glinka hesitated for a long time trying to decide whether to sign a contract with Police or retire.

“I’ve learned not to use the word “never”. I’ve been retiring for the last three years, I’ve made several statements, but you won’t convince me to make another one. I wouldn’t want to end my career in a bad manner, because when I watch some other players who are forcing themselves to continue playing, even though their perform poorly, I feel sorry. I don’t want to be the same” said Glinka in an honest interview with “PS” before this season.

She played four times in the Champions League final. With Asystel Novara (2005) and RC Cannes (2006) she managed to win silver medals. Only once she didn’t stand on the podium – in 2008 with Gruppo 2002 Murcia.

Now she is supposed to be a player, whose experience will help Chemik Police to succeed after winning their “group of death”. The team had a foretaste of competing in the Final Four tournament system while playing in the final of the Polish Cup, which they lost to PGE Atom Trefl Sopot.

“It was a good challenge. Even though we’ve lost, we’re happy we could play with an opponent who took the gauntlet up. Now we know what stress means. We needed the adrenalin, because until now we lacked games on such level. It is twice as important for us, as hosts, to show ourselves from our best side in Szczecin. The atmosphere will be amazing” underlines Chemik Police star.