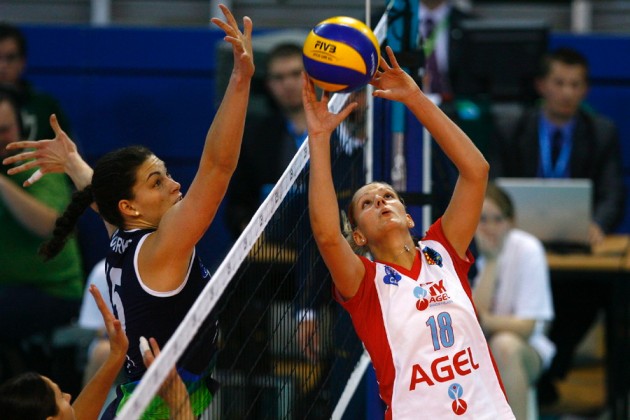 It was a match with many mistakes but Rachel Rourke and Erika Coimbra could power the home side to that much wanted victory.
Atom Trefl started out with a good pace (7:5, 10:5) but as PROSTEJOV stormed back to 10:9, Anna Podolec replaced Klaudia Kaczorowska for the home side. The score stayed very close for the remainder of the set with PROSTEJOV going even to the front (17:18) and SOPOT opting for Dorota Wilk instead of Izabela Belcik. PROSTEJOV went up even by three points but SOPOT did fight back to 21 all and the set eventually was sealed by an ace of Australian Rachel Rourke (26-24).

As the home side trailed 2:5 in the early phases of the second set, Wilk replaced once more Belcik before two blocks and one ace brought the provisional lead for SOPOT at 11:8. The home side did play well opening the gap up to 20:14 and it was Noris Leidys Cabrera that ended that section of the game at 25-17.

Wilk and Kaczorowska were included in the starting six for set 3 by head coach Jerzy Matlak and four consecutive errors by Agel PROSTEJOV paved the way for the provisional 12:8 in favor of the home heroines. Matlak was forced to call a time-out at 12:10 but his side reacted well and totally dominated the game up to the very end (25-16).

“It was a match full of mistakes from our side as well as from our opponents. They blocked out a lot but during the second and third set made many errors” says Atom Trefl leader Izabela Belcik. “This win is extremely important for the morale of the group and start creating the right team spirit”.

“We made fewer mistakes than they did plus Rachel Rourke attacked almost every single ball. That was the key to our success. It does not put an end to the problems of our team but we hope to get better and better” stresses Matlak.

“SOPOT played overall a better game than we did, especially in the second and third set where they attacked and blocked with good consistency” comments PROSTEJOV mentor Miroslav Cada.