Irina Voronkova, Kseniia Ilchenko and Irina Fetisova are playing for the Russian national team at the FIVB Women’s World Championship in Brno. They are all daughters of famous sportsmen who played for their national team in the past. 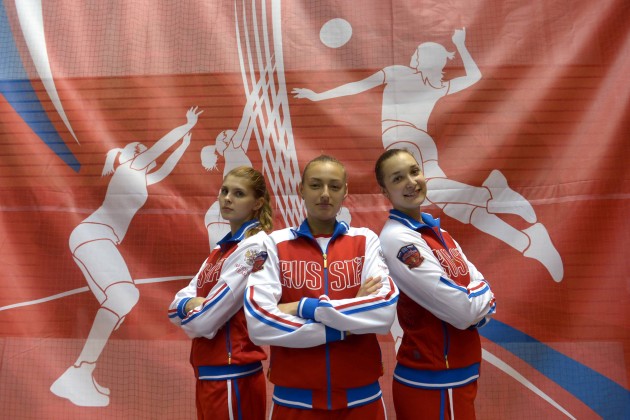 Irina Voronkova, spiker, is daughter of the new coach of men’s national team, Andrey Voronkov. “My father didn’t force me to become a volleyball player” she says “in fact at the beginning I started with basketball but then I tried volleyball and I preferred it. I was born in Turkey because my father was playing there, so I started my career there, but now I play for Dinamo Kazan in Russia.”

Ksenija Ilchenko has a famous mother (Irina Smirnova Ilchenko) who played with URSS national team and won two Olympic medals in a row (gold in Seul 1988 and silver in Barcelona 1992), instead. “I began a volleyball player because of my mother, of course, I grew up watching her matches, so it was quite an easy choice.”

She reveals “Since I started, my mother always followed me. She sits in the stands and suggests me how to play: it’s like I have two coaches, one on the court and one at home”.

She explains “My dream is to become a double Olympic champions like her, or to do better, if possible!” she says “Of course my idol and my hero is her, I hope to become a great player as she was.”

The third Russian star of the team is Irina Fetisova, middle blocker: she has also a famous sportsman at home, but he is not connected to volleyball. Her father is Andrej Fetisov, basketball player with a great career in Europe and with the national team.

“In fact I started with basketball, but then I tried volleyball because I didn’t like it too much.”

She explains “I liked volleyball, instead, but I didn’t think about a professional career as him, simply I played well and now I hope to improve as much as I can to play with the senior national team one day.

To read more news from this competition click on Junior World Championship 2013.

WCHJ W: Brazil in quarterfinals with their fifth victory

hello . please help me . I wanna speak with Irina Voronkova becase i love her playing but I can’ t I’m in another country . please show me a way to constant her. I serched for a long time to find a way but I can’t .pleas help meeeeeeee.

I’m sorry this is my email : abadikhahmostafa@yahoo.com.com
If u can find a way for my speak to Irina voronkova pleas send me an email.
Thank your very much indeed.