Russia completed a perfect run in Pool C of the FIVB Boys’ U19 World Championship with a quick straight-set victory (25-14, 25-15, 25-20) over Finland at Baja California High Performance Center on Monday. This and other volleyball news read on Worldofvolley.com. 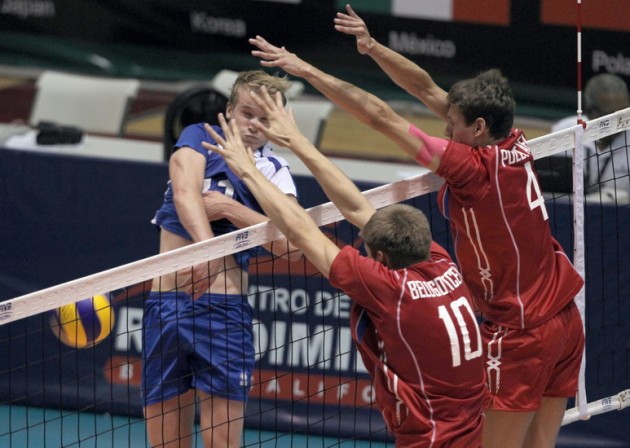 The European champions, who had secured the top place in the pool one day earlier, won their four matches of the preliminary round via 3-0 to collect the maximum 12 points. They out-blocked their rivals 9-2.

In three of those encounters, Russia kept the opposition below the 50-point mark and only Iran could reach 60 points in their match-up.

Victor Poletaev and Maxim Troynin finished the contest with 12 and 10 points as the top offensive contributors for Russian team. Miro Maattanen and Lauri Jylha each scored 11 points in the losing effort.

Russia will play United States on Wednesday in Mexicali when play resumes after a traveling day on Tuesday.

Russia’s Alexander Karikov used the last game of the preliminary round to prepare his team for an encounter against United States in the round of sixteen to be played on Wednesday.

Karikov gave playing opportunities and did some testing with game situations en route to a straight-set victory over Finland.

Victor Poletaev, captain of Russia: “It was our last game and all the players felt free. We practiced every volleyball situation and the second group of players had the opportunity to see action.”

Sakari Makinen, captain of Finland: “Russia is a very good team and we knew it was going to be a very difficult match for us. The good thing is that we competed until the end and didn’t give up.”

Alexander Karikov, coach of Russia: “Today I gave a chance to players from the bench. It was a day to practice many situations and I changed players and gave everybody the opportunity to play. Tomorrow we go to Mexicali to play United States and hopefully come back to Tijuana.”

Pertti Honkanen, coach of Finland: “It was a good match for us and we improved. Russia is a very good team and we are at a lower level. I am satisfied with some skills, like the attack. We still made many mistakes but we improved.”

WCHY M: Turkish and Argentinean players, glad for the support of Mexicali fans

Gazprom-Yugra about the absence of 3 players...