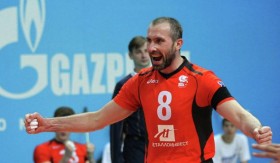 Volkov was almost stronger than himself, his every touch of the ball met with enthusiasm, despite the fact that a lot of these touches have been unsuccessful.

Setter Igor Kobzar significantly speeded up the Zenit game in comparison with the past, but some confusion in Kazan club attack was evident.

Zenit could not win with such a bad reception from Yakovlev, Mochalov and Yegorov or with rested block. On the other hand, Belogorie seemed scary with Tetyukhin and Zhigalov.

Other matches in the tournament: