Last week Zenit KAZAN defeated Lokomotiv NOVOSIBIRSK (3:1) in the so-called “clash of titans”. On Wednesday, the bronze medallist from the last edition will try to prolong their winning streak as they host Austrian rookie Posojilnica AICH/DOB for the third round of action in the prelims of the 2014 CEV DenizBank Volleyball Champions League – Men. 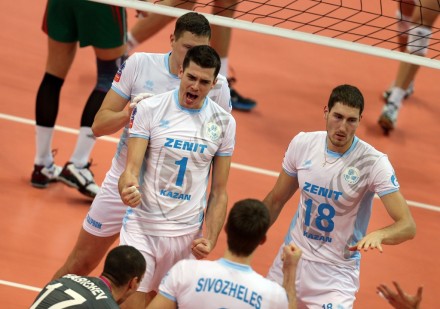 There was another opponent from Austria that Zenit KAZAN got to test last year. The team of Vladimir Alekno twice routed Hypo Tirol INNSBRUCK 3:0. Perhaps, the club from the Federal State of Carinthia will manage to do better than their compatriots who failed to withstand Posojilnica AICH/DOB and lost the Championship series in the Austrian national league last year. The debut of Posojilnica AICH/DOB in the 2014 CEV DenizBank Volleyball Champions League turned out to be far from the best – two 0:3 defeats. But the team led by head coach Johan Verstappen does not lapse into despair. Last weekend Posojilnica AICH/DOB outplayed 3:1 Hungarian club Gorter KECSKEMETI in the Middle European League.

Zenit KAZAN has claimed two straights wins at the outset of the Russian Superleague. On Saturday, the team from the capital of Tatarstan beat Prikamie PERM 3:0 in an away match. Maxim Mikhailov became the top scorer for the side mentored by Alekno.

“The victory over Lokomotiv gave us a powerful emotional energy boost. All the guys have realized that we can and we know how to beat good teams. In the match against Prikamie, we played well in defense and scored a lot of important points with the serves by Mikhailov and Matthew Anderson. I am glad that we are developing this way and we have started to win”, says Zenit KAZAN setter Nikola Grbić.

Zenit KAZAN is still experiencing problems due to numerous injuries suffered by its players. Alexander Volkov, Alexey Verbov and Alexander Abrosimov are all undergoing medical treatment.

How to do Physical therapy exercises for feet

CL M: RZESZOW wants to bounce back after home defeat