CEV President André Meyer addressed the Russian media plus a few foreigners from Poland and Italy by congratulating the four teams who have made their way to the very last and most exciting act of this year’s CEV Volleyball Champions League. 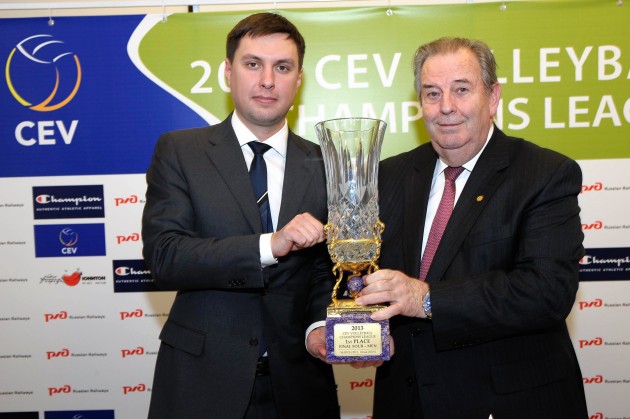 CEV President André Meyer addressed the Russian media plus a few foreigners from Poland and Italy by congratulating the four teams who have made their way to the very last and most exciting act of this year’s CEV Volleyball Champions League.

“You have showed that you are the best though you were confronted with some other world-class sides and that you deserve to be here in Omsk” he said.

Mr. Meyer drew the attention of the media on the actions that are being studied by CEV to continue the development and growth of what has turned into the most prestigious club competition worldwide. “Since the CEV Volleyball Champions League was introduced back 13 years ago, we have always striven for the best and we can be proud that Europe is the sole continent with such a world-class competition especially conceived for clubs. Still we do wish to keep on improving and with this mind we recently had a working group attended by a few clubs to listen to their proposals and work out innovative ideas for the future. We could understand that their main wish is to get more high-level games right from the start of the competition. However, we also have to take into account that they are also busy with their respective national leagues, so this means that any change in the competition formula would have to be thoroughly analysed and discussed. We have identified a series of actions that may follow in the near future and that will be submitted for approval to the CEV Board of Administration. However, all these measures won’t enter into force before the 2014/2015 season”.

Mr. Meyer nevertheless recalled that quite a major change will be adopted already for next year’s edition of the CEV Volleyball Champions League. “We have revised the golden set rule, something that clubs and especially coaches were not that happy with. This means that a golden set will be played only in case of a real tie in points after home and away matches. The team scoring a 3:0 or 3:1 win will get 3 points, 2 will be attributed for a 3:2 win and the side losing at the tie-break will get one point. Only in case of a tie in points after home and away matches, a golden set will follow and I think this solution is fair and reflects the results on the court more than anything else” the CEV President said.

With less than 24 hours to go for the first semi-final match that will see last year’s winners of Zenit KAZAN play Lokomotiv NOVOSIBIRSK, Mr. Meyer did also praise the hosts of this final four for all their work: “I have to stress that Lokomotiv embarked on a real challenge as this tournament is taking place away from their home. However, they have been working very hard and showed total determination in the past weeks, cooperating very closely with the local authorities here in Omsk in order to make all this happen”.

A major Volleyball competition is returning to Omsk five years after a European Qualification Tournament for the 2009 edition of the FIVB World Grand Prix was held at “V. Blinov” sports and concert complex in Siberia’s second largest city. “Our fans will be traveling tonight, by train, from Novosibirsk and we expect they will be contributing the right ambiance on the stands for our players to show their best” Roman Stanislavov, General Director of Lokomotiv NOVOSIBIRSK, said. “We are extremely grateful to CEV because they have showed much trust by deciding to choose our club to host this year’s final four though we are not playing in our home town. We have to thank the City of Omsk, the Governor and all those who have worked hard for making this possible. The next couple of days will be very special for our team, but also for Volleyball and the whole Siberian District as well. This is an all-Siberian final”.

To round off the press conference Mr. Stanislavov showed the trophy that will be awarded on Sunday to the winner of the final four, a very unique and special cup that reflects the work of Siberia’s craftsmen by combining the raw materials (wood, stones, and crystal) available in this cold, but nevertheless very fascinating neighbourhood.

To read more news from this competition click on CL M F4 OMSK.

CEV CL M: Volleyball at its very best in Omsk!