Bergamo, Italy, February 27, 2012. After playing each other for a total of four times this season, Italy’s Volley BERGAMO and MC-Carnaghi VILLA CORTESE will be re-starting from the scratch this coming Wednesday when it comes to the return match for the 1/4 finals of the 2012 CEV Volleyball Champions League. 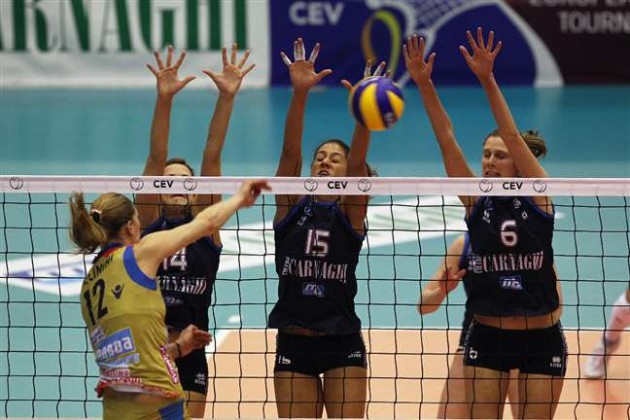 Last act of Italian drama coming up in Treviglio

Some of the world’s finest Volleyball players will be in action at “PalaFacchetti” with a pass for the final four scheduled for late March in Baku at stake.

After sharing wins in their two clashes for the national league – they both claimed away victories in straight sets – these sides delivered a great show some 10 days ago in the Supercup match where Volley BERGAMO stormed back to claim the trophy at the tie-break before VILLA CORTESE seized the night last Thursday in the first 1/4 final round.

Francesca Piccinini, Valentina Arrighetti and Annamaria Quaranta will carry the hopes of BERGAMO while MC-Carnaghi, a club hailing from a tiny village in the outskirts of Milan, will be chiefly counting on Canadian opposite Sarah Pavan, US American setter Lindsey Berg and Puerto Rican spiker Aurea Cruz.

“We will extend our rivalry” says BERGAMO head coach Davide Mazzanti, “and this match will be like a one-shot, a kind of final. We have to stay cool, play point for point and make sure that our experience finally makes the difference. We will have to attack well, avoid mistakes and most of all serve with the right pressure to score a win and then go for the golden set, thereby giving our fans something more to cheer about”.