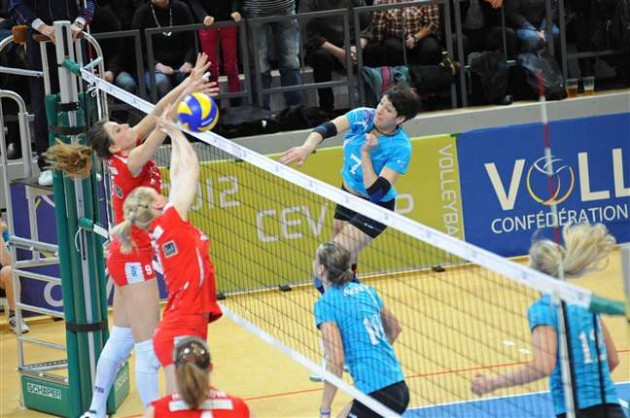 SCHWERINER SC ends its journey as Yamamay advances to semis

“Yamamay BUSTO ARSIZIO is one of the best teams in Europe and we are still on our way to the top. So this match is another step to improve and to get more experience at this level” home coach Teun Buijs had stated before the match.

More than 1’000 fans in attendance were hoping for a golden set but to make it there the local heroines had first to win their home match against the leader of the Italian national league.

And the SSC started well into the first set until the team of captain Helena Havelkova took the lead and the guests kept a margin of a few points up to the end (25-20).

Supported by at least ten cheering Italian fans Yamamay took advantage of the mistakes made by the home side in defense and reception.

Even though SCHWERINER SC got gradually back on track, still the second set was finally taken by the visiting team (25-22).

In set number 3 the hopes of the local audience were backed up as the hosts put Yamamay BUSTO ARSIZIO under pressure and the team of head coach Teun Buijs believed in their chances to make it to the golden set.

Motivated by a standing ovation the SSC didn’t miss a trick and eventually claimed this section of the game with the score of 25-23.

“All-or-nothing” was hence the motto for SCHWERINER SC by that moment but Yamamay changed gear by the money time of the fourth set eventually sealing it at 25-20 to play their compatriots of Robur Tiboni URBINO in the semifinals.

This defeat was the last test for SCHWERINER SC before the real highlight of the season so far.

This coming Sunday the national cup will be at stake in Halle/Westfalen in front of 10’000 fans with SCHWERINER SC playing Rote Raben VILSBIBURG hoping to take its fourth title after seizing the crown in 2001, 2006 and 2007.

ITA A1: Zaytsev: “We must fight till the end”