Sunday and Monday will see the decision in the fight for the title in this season's Middle European League Women 2011/12. The Final Four will take place at the Multiversum hall in Schwechat. 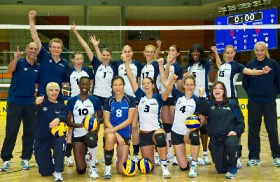 After securing the top position in the qualification round the girls of SVS Post are the favorites in the upcoming tournament. But also the two teams from Bratislava as well as the one from Maribor will aim at winning the title. This means that the spectators can expect exciting matches at the big MEL showdown.

The hosts of SVS Post only had to accept two defeats in the qualification round, both in away matches against Branik Maribor and Doprastav Bratislava respectively.

And both the team of Slovenia and the team of Slovakia are also qualified for the Final Four. However, the first opponent of the home team will be Slavia Bratislava in the semi-final. One look at the ranking in the home matches shows that in Schwechat the Austrians only lost four sets in eight encounters.

In the ranking of the away matches both teams from Bratislava have scored four victories, while Maribor could only win two encounters. SVS Post (six victories) also secured the top position in this ranking.

”Our chances are good“, says SVS Assistant Coach Peter Gartmayer, who is aware of his team’s role as favorite but dampens the premature euphoria: ”It will not be easy for us.” The task of the beach volleyball European Champion of 2007 is to analyze the matches and filter relevant scenes from video material and therefore knows the opponents very well.

…about the semi-final opponent Slavia Bratislava:

“We were able to defeat them twice but they have improved. The injured players will be back on the court in the Final four.” SVS Post still has to manage without setter Zburova (Cruciate ligament tear) but has compensated this very well.

“Milosavljevic is a tricky setter who likes to score herself and does that very well. With the experienced girl from Serbia, who will not go abroad now despite earlier plans, they surprised us in the away match (1:3). A solid team with strong wing spikers – a hot candidate for moving on to the final.“

“Very similar to Maribor; they were able to inflict the second defeat upon us in the qualification round. They are particularly dangerous with attacks from the back field. With Henson they have a strong American player in their ranks. Also their number 9, Pencova, is a very good player.“

SVS Post qualified for all final Fours so far

The Middle European Zonal Association (MEVZA) was founded in 2005 and initiated the Middle European League. The participating teams have to be qualified for one of the European Cup competitions. The team of SVS Post qualified for all of the seven Final Fours so far. After three second places and two third places the girls from Lower Austria hope for their first victory.