Cuneo, Italy, December 19, 2011. After scoring a speedy 3:0 win last week in France, the Italians of Bre Banca Lannutti CUNEO claimed the provisional leadership in Pool D of the 2012 CEV Volleyball Champions League – Men and the group around head coach Flavio Gulinelli is set to re-play Stade Poitevin POITIERS this week for the fourth round of action. 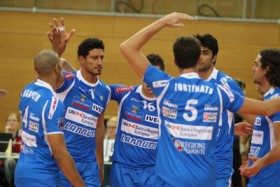 Gulinelli is still delighted with the performance delivered in France: “That was a good match and it was important to take home three points, thereby taking also the leadership in our group” he says.

“I have taken advantage of our roster that includes many excellent players and at the same time I have tested some different line-ups, hence confusing our opponents”.

Bre Banca Lannutti CUNEO is having a very busy schedule this month, playing almost every three days as the Champions League is running in combination with the national league and cup. After traveling back from Poitiers, CUNEO had only a few days to train before traveling to Trento and lost there on Sunday the real highlight of the last round in the national league. That match ended up in a 3:2 win for the triple winners of the CEV Volleyball Champions League and FIVB Club World Championship, but it also turned into the best advert for the sport.

“We have to score another victory as the Champions League remains one of our most important goals for this season” concludes Gulinelli looking already ahead.