Prostejov, Czech Republic, December 19, 2011. If this coming Wednesday VK Modranska PROSTEJOV suffers another defeat while playing Atom Trefl SOPOT for the fourth leg of the 2012 CEV Volleyball Champions League – Women the chances of the group around head coach Miroslav Cada to make it out of the Pool play would be minimized. 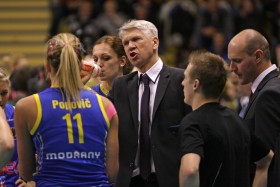 So the Czechs have to mobilize their full physical and mental energy for the upcoming clash with the rookie from Poland. Since the competition format was revised after assigning the final four to the city of Baku already this past July, a total of sixteen teams – out of the 20 participating in this year’s edition – will finally make it to the next stage of the competition. That means that, apart from the best three of each group, also the fourth-ranked team with the best score will have the opportunity to continue its campaign in Europe’s most elitist competition and therefore for VK Modranska, as well as for any other team, every set and point chartered during the League Round will have an enormous value.

However, the Czechs do not want to start any calculation as their goal is still to finish at least third in their Pool thereby advancing automatically to the 1/8 finals. In order to attain this goal they first have to claim the upcoming home match with Poland’s Atom Trefl SOPOT that last week edged the Czech national champions in three straight sets.

“The quality of our play has been worsening since the start of the Champions League” says head coach Cada, “but this does not mean that we can’t stop that negative trend and get back on track. We strongly believe in our chances to claim this match and we are currently preparing as thoroughly as we can. Atom Trefl is surely a strong opponent but we still have not showed our full potential this year, so it is time to go for it” he adds.

Slovak setter Monika Smak shares the same feelings: “We lost quite clearly last week in Poland because we did not play good. Even though we respect our opponents, still they are something we can deal with and therefore I am convinced that we can go for a positive result here in Prostejov. I think that if we play as we can, we shall definitely score a win” states the 30-year old player