Leuven, Belgium, December 19, 2011. The “SportOase” in Leuven will be completely sold-out on Tuesday evening as Belgium’s rookie Euphony ASSE-LENNIK plays its second home match in the prelims of the 2012 CEV Volleyball Champions League, this time taking up the challenge brought by Russia’s heavyweight Zenit KAZAN. 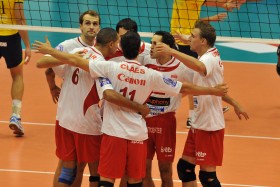 Euphony recently got the right boost of confidence after claiming the last match on schedule for the national league in three straight sets, while Noliko MAASEIK – that is currently on top of the standings there – lost one point after scoring a 3:2 away win in Antwerp. If ASSE-LENNIK wants to maintain some chances to make it to the Playoffs 12, the Belgians have to score a positive result on Tuesday even though Zenit KAZAN is unanimously considered one of the top contenders for the final crown in this year’s CEV Volleyball Champions League.

Last week Zenit scored a 3:0 win in Kazan and even though Dutch head coach Marko Klok was satisfied with the fighting spirit showed by his players, still he did regret the chances they did not exploit in the first and second set. The Christmas time will be pretty busy for Euphony as after the match with KAZAN, the Belgians will play the home game for the semifinals of the national cup with Knack ROESELARE already next Monday, December 26.