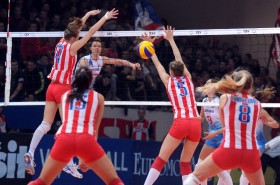 The guests from Russia caught a good start and they did not have to wait that long to pocket the opening set.

The head coach of Crvena Zvezda, Ratko Pavlicevic, made some changes to his usual starting six as Mina Popovic started as middle blocker and Ana Bjelica as opposite, but the lead of Dinamo was never in danger finishing the set with excellent figures in reception (94%) and attack (55%).

The home side went up 6:3 in set 2 but the guests clawed back and turned the score around with the help of Angelina Grün, the German player that was recently transferred to Dinamo.

Although the Muscovites were leading 22:17, still the home heroines fought back to eventually take their first set in this year’s CEV Volleyball Champions League.

However, Dinamo dominated the scene in set 3 and 4; coach Pavlicevic used all of his time-outs, he also opted for some back-up players but could not find a way to pass through the tall Russian block.

In set 4 Crvena Zvezda resisted up to the second mandatory stop but after that Dinamo did change gear to finish the match with the score of 3:1.

Ana Bjelica paced the home side with 17 while Jovana Stevanovic added 12 to the count.

Bjelica commented: “We are happy, not only because we took our first set in this year’s competition, but also because we played a good game”.

Grün added: “I am satisfied with my debut for Dinamo. Crvena Zvezda is a young and talented team, they resisted very well tonight. However, our victory was never to be questioned”.