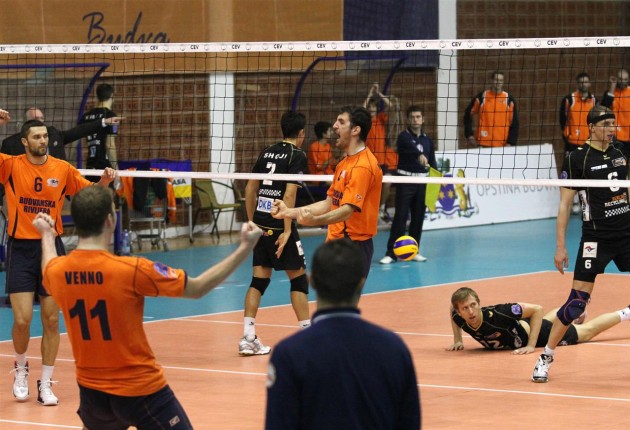 BUDVA was still searching for its first win in the competition while BERLIN wanted to re-assert its ambition to make it to the Playoffs 12 of Europe’s most elitist Cup. The hosts played their best game of the season but still it was not enough to claim that much desired win.

Budvanska Rivijera opened very well with Vojin Cacic and Luka Suljagic on fire (8:4) well supported by wing spiker Nemanja Dukic. BERLIN got to the front at 13:14 for the first time but it was BUDVA that could celebrate the provisional 1:0 with Cacic pocketing a set ball (25-23).

Budvanska Rivijera stretched that momentum also to set 2 (14:10) but eventually could not resist to the comeback of BERLIN, making a few mistakes that helped the guests go for the 1:1.

After missing that opportunity the hosts responded very well in set 3 with good services and blocks not to mention a solid defense contributed by Dukic, Cacic and Rasovic. BERLIN had no means to oppose to the guys mentored by Sinisa Reljic who could go for the 25-18 that meant they were ahead 2:1 in sets.

BUDVA definitely wanted to take three points home by finishing the match in the fourth set but with Marko Vujovic looking tired – and Oliver Venno no longer that effective in attack – BERLIN could call for the tie-break.

The guests opened with the right pace there (8:4) but Dukic, Suljagic and Veljko Petkovic got the home side back on track (10:11). After two errors by Kromm and Spirovski, the score stood at 13 all but the same players scored the next two points for BERLIN thereby pocketing the final 3:2 win.

“I am evidently not satisfied with the final result but I am very happy with the quality of play we showed tonight” said home coach Sinisa Reljic. “We showed determination, fighting spirit and we really wanted to win but in the end we were not fresh and calm enough to bring it home. We are progressing since the start of the season but the group needs to play at this level for two months in order to display its full potential. We still have a home match with Jihostroj CESKE BUDEJOVICE and I think this is our chance to finish the prelims with at least one win in the group”.

“It was an interesting game; we had more luck and celebrated the win in the end but our opponents would have deserved it as well. We expected good resistance from Budvanska Rivijera and so it was. Both teams played superbly in defense tonight. We are very close to achieve our goal which is to make it to the second stage of the competition but everything is still open because we also have to take into account the matches still to be played by Lokomotiv and Jihostroj” said BERLIN Serbian-born player Aleksandar Spirovski.

CL W: Vakifbank comes from behind to save impeccable record after four rounds