CEV CL: DOL for Playoffs coming up on Thursday afternoon

Luxembourg, January 17, 2012. The much awaited Drawing of Lots for the second phase of the 2012 CEV Volleyball Champions League – Playoffs 12 for the men’s competition and 1/8 finals for the women’s division – is coming up this Thursday, January 19, at 2.30 pm right upon completion of the League Round. 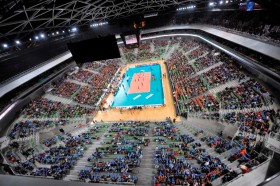 DOL for Playoffs coming up on Thursday afternoon

Apart from delivering the draw for the next phase of Europe’s most elitist competition, the European Volleyball Confederation will also announce the organizer of the men’s final four with the venue of the last act for the women’s competition, Baku, being already known since this past July.

The League Round is set to come to a close tonight for the ladies while the last 12 prelim matches of the men’s competition are scheduled for Wednesday.

As per the official regulations, teams will be drawn taking into account their results from the prelims, which means those finishing first in their respective groups shall get, as far as possible, a favorable draw.

Additionally, teams stemming from the same prelim Pool won’t cross their ways again in the Playoffs 12 (men) and 1/8 finals (women); moreover, if three teams representing the same country make it to the Playoffs 12 or 1/8 finals, two will be assigned to the same half of the draw thereby making sure that only 2 finally advance to the final four.

Detailed results of the DOL will be available on the CEV website at around 4 pm.