Are we going to get the new champion of Europe? Or France is going to stay at the throne? Find out in our men's EuroVolley 2017 Live Blog! 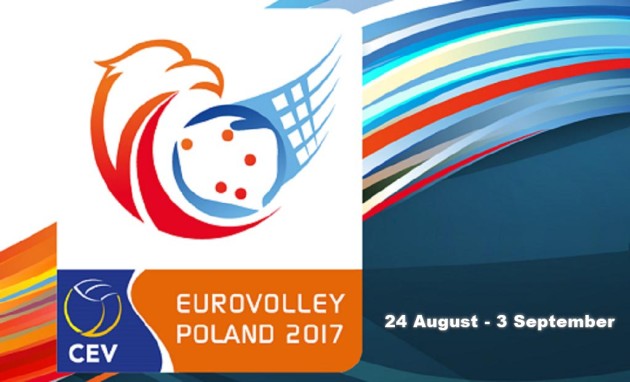 There are 16 teams that will participate at the European Championship in Poland. The teams are divided into four groups:

Check out the schedule of the tournament (24 August – 3 September).

The information about EuroVolley (M) will be updated several times per day. You will have a chance to read much news about the teams, to watch interesting videos and to see some photos from Poland.

12:33 CET – These are the best moments of the gold medal match

23:33 CET – RUSSIA ARE THE EUROPEAN CHAMPIONS

17:53 CET – Here are the links for the live stream of today’s games of the last day of the competition

16:59 CET – The players of the German NT had some relaxing time before the big finals, but with the German athletes, even that has to be competitive. At least a bit… What cards will they pick against Russia?

12:30 CET – Sam Deroo is impressed by the performance of the Russian team

10:00 CET – Highlights of the semifinals games:

17:49 CET – Do you want to watch EuroVolley semi-finals? Here are the links for the live stream!

14:27 CET – This is what happens when you give a camera to the volleyball player to shoot his teammates…

KRAKOW | Ride along with @ossrb! Yesterday we handed over the camera to Serbia’s Drazen Luburic. See what he and his teammates got up to… pic.twitter.com/MpssYOHcJo

Preparing the semi vs. with some gymnastics for the older and some Volleyball for the younger guys! #EuroVolleyM #Wewantamedal pic.twitter.com/b0LMYNSgfV

09:40 CET – Dero knows what is needed to defeat Russia

16:00 CET: These are the highlights from the European Championship matches:

10:14 CET – Grbic says his players played at the highest level

18:13 CET – These are the YouTube links for the live streams of EuroVolley quarterfinals:

16:23 CET – De Giorgi – “The result does not reflect how we worked, and with what intensity”

15:17 CET – Kurek and Kubiak have commented on the early elimination:

“We put a lot into this but it did not work out.  We thank the fans who stick with us through good and bad,” says Kubiak.

“We gave a huge effort and devoted private time, which we could really spend differently,” adds Kurek

15:00 CET – After their elimination from the European Championship, the whole team has decided to face media in Poland 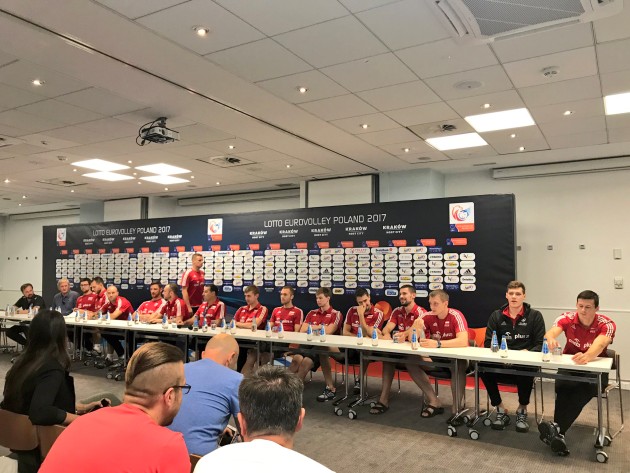 “We didn’t play well and the Slovenians were much better. I want to congratulate them. We generally played well in this tournament, no matter whom we faced – whether it was Estonia or Finland. I suppose that if it had been some other team, we would have won. Today we lacked this fire in our eyes, which has been propelling us during the group phase. Even when our serve was causing difficulties, Slovenia were able to receive perfectly and we had no solution at all for their serves.”

All games will be played on Thursday, August 31

Slovenia defeat Poland, while the Czech Republic down France!

20:00 CET – Bulgaria down Finland after making a comeback

19:30 CET – Italy will play in the quarterfinals

09:34 CET – Kurek talks about Slovenian NT with a huge respect

18:19 CET – Finally! This is what fans were waiting for: the European Volleyball Confederation (CEV) announced it will stream all EuroVolley 2017 matches in the knockout stage on YouTube.

Pssst! All #EuroVolleyM matches from now on will be LIVE streamed on YouTube! Visit quickly and set a reminder! https://t.co/7OsjPKMwOo pic.twitter.com/vAfYOON8eF

16:30 CET – Check out some of the best photos of the fans in the Preliminary Round 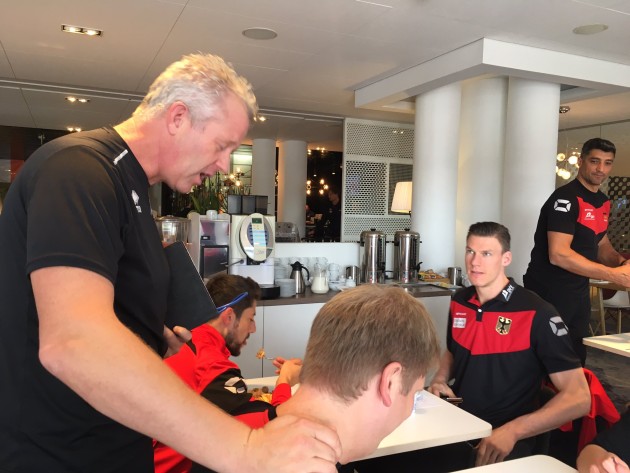 11:43 CET – Blengini praises the development of the Turkish volleyball in recent years

10:27 CET – Konstantinov reveals how his team managed to perform well at blocking segment

09:30 CET – The Turkish captain believes his team is ready to down Italy!

08:45 CET – Vital Heynen comments the performance of Belgium vs. The Netherlands

23:45 CET – Playoffs bracket revealed, there’s a big derby waiting for us in Krakow!

23:00 CET – Preliminary Round is over – All quarterfinal and Playoff participants are known!

20:52 CET – This is how the Germans celebrated the perfect record in pool stage and qualification for the quarterfinals

19:40 CET – All direct participants of the quarterfinals are known!

18:32 CET – The bus of the Finnish NT involved in a crash before the match vs. Serbia

14:05 CET – Turkey will be highly handicapped for the decisive game vs. France!

12:13 CET – The Dutch National Team got the support from their ambassador in Poland before the last round game vs. Belgium

10:53 CET – France’s coach Tillie admits his team would likely suffer a second defeat in EuroVolley if there wasn’t Ngapeth.

09:59 CET – Despite reaching the 2nd win in the tournament, Belgium’s coach Heynen disapproved of the way his players performed against Turkey

08:49 CET – The middle blocker Piano makes sure his fans that Italy will not rest on their laurels after achieving first win in EuroVolley

23:55 CET – France survived the thriller vs. The Netherlands

22:51 CET – Germany secured the spot in the elimination stage

19:00 CET – Italy annulled the opening loss by beating Slovakia; Belgium prevailed in the tie-breaker, once again

10:40 CET – Did you know that evil fate follows the title holders who lost the opening match in the European Championship? Will France escape it?

08:31 CET – Heynen says the win vs. France was a surprise for them, too; Tillie states that the things now got complicated for his team

13:00 CET – Shlyapnikov – “In every aspect, my players were better than the Bulgarians”

22:00 CET – The vice champions defeat Spain to open EuroVolley in a good way

20:22 CET – Finland score an important win at the start of the tournament!

Opening ceremony of the EuroVolley2017 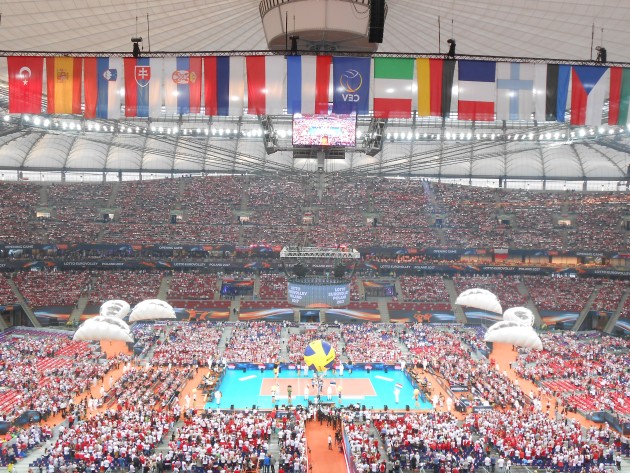 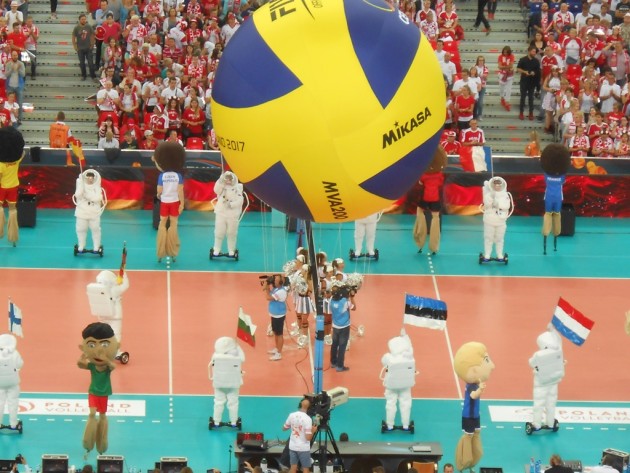 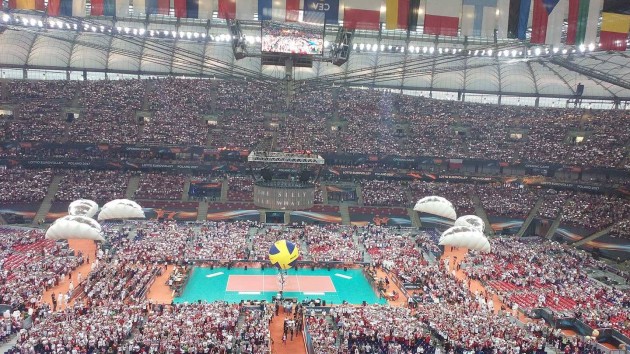 18:42 CET – Ivan Zaytsev has message for his teammates from Italy

16:13 CET – This is the EuroVolley 2015 championship point, scored by Earvin Ngapeth! Real masterpiece.

Polish fans all over Warszawa 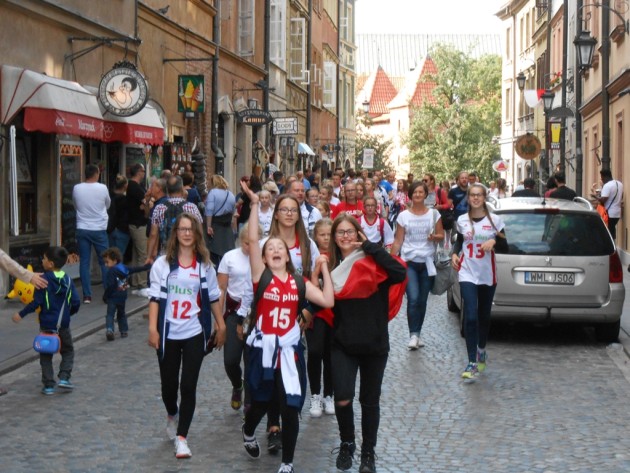 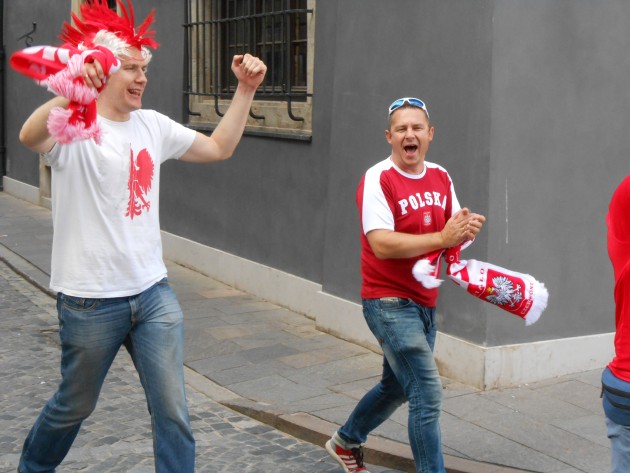 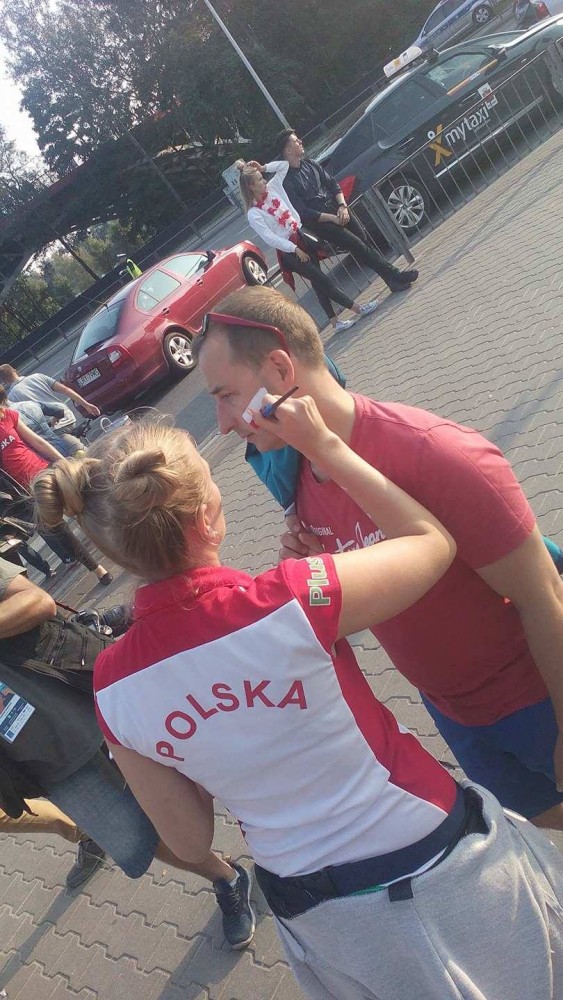 10:00 CET – Zagumny has an interesting message for Polish players

23:33 CET – Uros Kovacevic thinks Serbia is going to win the game despite some difficulties at the stadium

19:30 CET – Serbia and Poland, who will open the European Championship 2017 in Poland have checked the court at the stadium in Warsaw 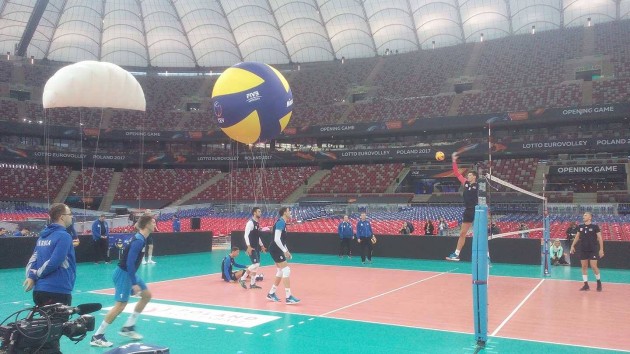 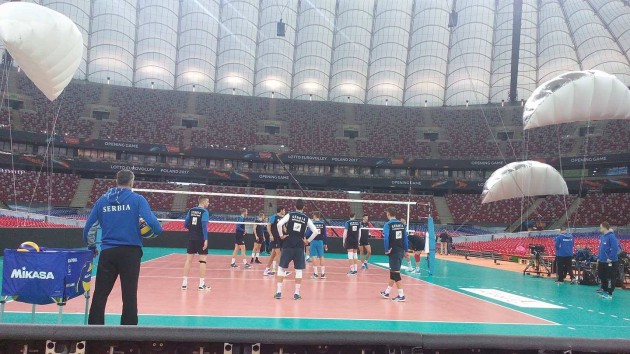 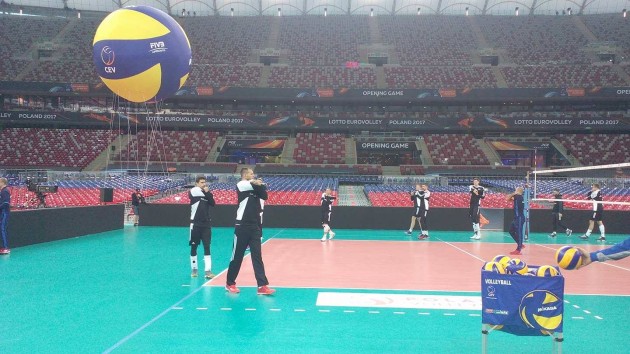 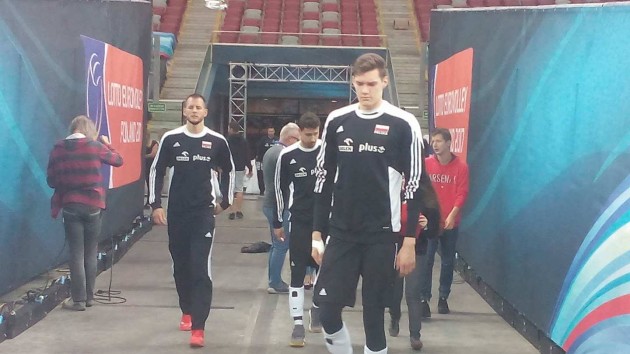 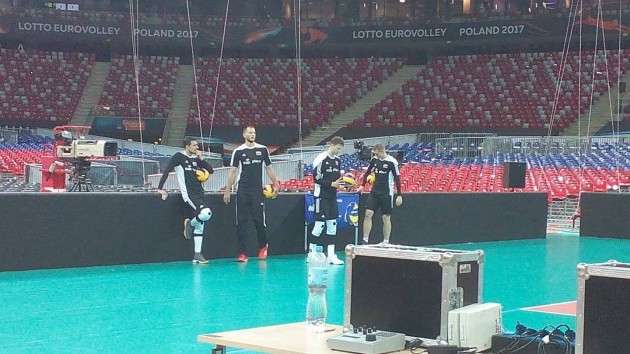 19:00 CET – Serbia had the first training at the National stadium PGE Narodowy in Warszaw 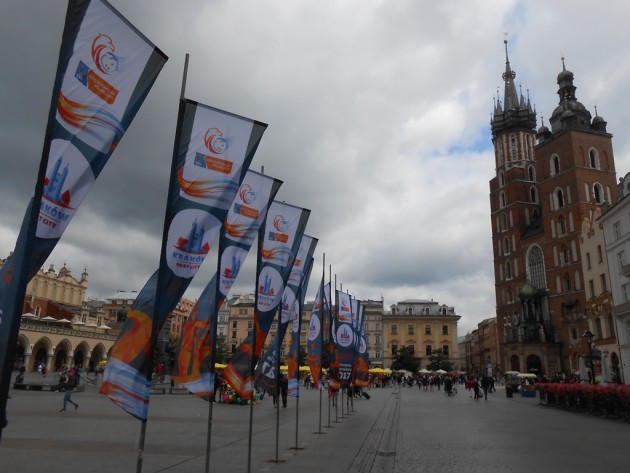 13:02 CET – Let’s hear some words from the president of the Polish Volleyball Federation:

“We prepared everything to the last detail for this day, to make fans satisfied not only with their emotions from the game but also with the perfect organization of the event. Therefore, we decided to begin works at the stadium already a week before the Opening Ceremony. On August 24, the PGE National Stadium will be ready to host 65,000 supporters,” says Jacek Kasprzyk.

12:22 CET – We won’t watch these 13 stars at the European Championship

22:22 CET – Bieniek remains in the Polish squad for EuroVolley

20:22 CET – Castellani says Kubiak is the most important player of Poland

“We have prepared very well for this European Championship. The team has been working hard for the past six weeks. We showed a good progress during the friendly matches, achieving some positive results. That’s why we are going there with our heads up,” says Sokolov and adds – “I feel very well physically. I had a vacation which I used to rest from volleyball. I think I will perform better than during the World League. I am ready to play and to give 100 percent to help the team. However, I can’t do it only by myself. We are a team. We have to go out and play at the maximum level.”

16:13 CET – Ivovic has a message for his teammates

15:00 CET – Did you know that the Czech Republic won the gold at the first European Championship in 1948. Russia have 21 medals and they are the team with the most number of trophies in Europe.

10:00 CET – Squad of Turkey for the European Championship

18:44 CET – This is the squad of Bulgaria for EuroVolley!

11:35 CET – In Pool A we are still waiting for the final squad of Serbia. While we are waiting for the Nikola Grbic  to announce his team of 14 players, we present you, Estonian team.

21:00 CET – Around 60,000 tickets are expected to be sold for the opening game of the European Championship between Poland and Serbia. It’s going to be a real spectacle. 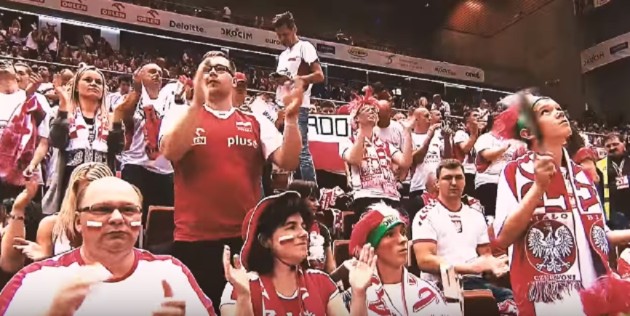 14:02 CET – Ngapeth will definitely play at the European Championship

10:23 CET – Nikola Grbic hopes that Ivovic will be able to help them at EuroVolley

14:45 CET – The European Men’s Volleyball Championship is almost at the door and almost all national teams already announced their rosters for the competition. We will present you, Czech team. CLICK HERE.

“I think, we are on the right way. We still have time. During the prep period, some players had a lot of difficulties with the injuries but we will be ready for a big challenge. We are working to reduce as many mistakes we can. I can say that Russia have a difficult group. The first task is to beat Bulgaria and we will be close to the semis,” says Mikhailov.

18:03 CET – Konstantinov says that he is not afraid of any team, commenting also that he refused a proposal from Russia.

13:00 CET – Russia without Kovalev on EuroVolley

21:00 CET – Marko Ivovic one of the main players of the Serbian National team got injured during the second set in the friendly match against Slovenia and it seems that he will not travel to Poland on EuroVolley 2017.

17:00 CET – Two changes in German squad due to injuries

17:04 CET – These 14 players that will represent France at EuroVolley 2017. The head coach of TEAM Yavbou have made his choice, placing Kevin Tillie along with Jenia Grebennikov at the position of libero:

16:22 CET – The opening game of the men’s European Championship is going to be held at the Warsaw national stadium (capacity 62,100). 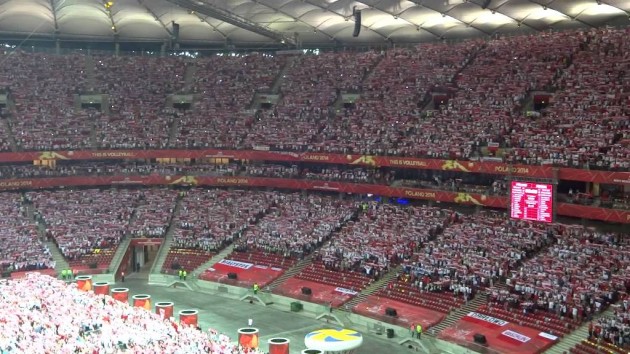 These are the other host cities:

20:22 CET – This is how Podrascanin prepares for the tournament

18:00 CET – These players will represent Poland at EuroVolley.

ECH 2017 M: These players will represent Poland at EuroVolley!