An indoor Mikasa volleyball, normally costing around 70$, was clinched to a deal at 60,000,000 Rials (approximately 2,500 $) in a Charity Auction for the benefit and support of Mental and Motion disabled patients recently held at Parsian Azadi Hotel, a five star hotel in Tehran by Imam Ali Charity Institute. 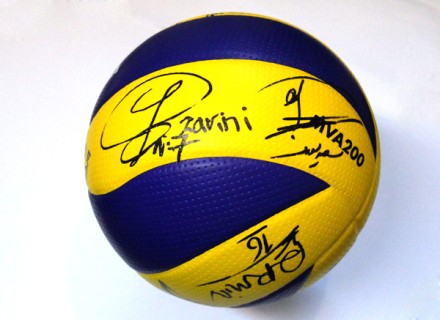 The Mikasa Company manufactures and exports thousands of balls to all over the world every year. Some of them are dispatched to Iran.

The ball became exceptional and valuable as it was chosen by random for signatures of players and officials of the Men’s National Senior Volleyball team of Iran. For some time it sat  in the awards showcase of the president’s office as a worthy item among other pieces. Later on, Dr. DAVARZANI, president of Iran Volleyball Federation donated the ball as a gift to Bank of SAMAN, the current official financial sponsor of Iran Volleyball.

Then the an idea shone in the mind of highest authorities of the bank, who made an amazing decision to sell the ball in an auction for the highest price to a buyer for the benefit of Charity. Now the ball, to some degree, has created a price record and found a new home at the cupboard of the auction winner.