Dejan Bodiroga from Serbia will be the new President of FIBA Europe. He will replace Olafur Rafnsson from Iceland. Probably before his mandate is up at the end of 2013. You can read all relevant news from volleyball world on Worldofvolley.com. 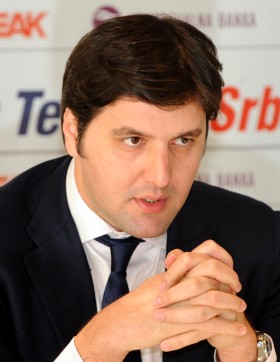 FIBA Europe has had some internal struggle for a while. Some of those problems are directly related to President Olafur Rafnsson. It started with the big Basketball countries in Europe being unhappy with the fact that somebody from such a small Basketball country as Iceland could get this type of job (in 2010). But there were more problems. Mainly between FIBA Europe and FIBA World.

At the core of the conflict was a fight between FIBA World and FIBA Europe, where FIBA World wants a four year competition cycle, while FIBA Europe wants a two year.

Canadian Nar Zanolin (at that moment Secretary General of FIBA Europe) – acting without the approval of FIBA Europe president Olafur Rafnsson – sent letters to many national Basketball federations in order to gain their support for this move and retain the current Eurobasket format, meaning a competition of 24 teams every two years.

FIBA Europe did not held such meeting, even though the statutes dictate that if 15 or more federations request it, it has to be held within 60 days of the request. Therefore, the 28 national federations took FIBA Europe to the Court of Arbitration for Sport (CAS) in Lausanne, Switzerland, for not obeying its own statutes.

At that point it also seemed that this group of 28 really wanted Olafur Rafnsson to be replaced as soon as possible.

At the end of October, 2012 Kamil Novak from the Czech Republic became the new Secretary General of FIBA Europe, replacing the fired Nar Zanolin. President Olafur Rafnsson officially has a mandate until the end of this year, but it looks like he will be replaced sooner than that.

Dejan Bodiroga (1973) was one of the biggest names of European basketball around the turn of the century. He won the European- and World Championships with his national team and the Euroleague with Panathinakos from Greece and FC Barcelona from Spain.

After his playing career Bodiroga was the GM of Virtus Roma from Italy, and later became the Vice President of the Serbian Basketball Federation.

Dejan Bodiroga was the favorite candidate for the FIBA job among the big clubs in Europe and also the big Basketball countries.

Serbian Dejan Bodiroga was second cousin to Croatian legend Drazen Petrovic (father was Serbian). Bodiroga’s grandmother (on fathers side) and the grandfather of Petrovic (also fathers side) where brother and sister.

Check out our Did you know? section, every Friday a new story! Tomorrow read about Helping Your Daughter Cope With Being Lesbian In Sports – Tips for parents.